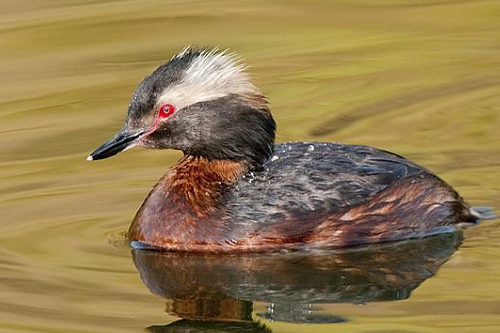 Characteristics and Range The striking combination of rusty neck, dark head and golden plumes or "horns" makes the Horned Grebe perhaps the most visually attractive of all the grebes in breeding plumage. It has a circumpolar distribution, breeding in northern wetlands of both Eurasia, where its English name is Slavonian Grebe, and North America, where it is widely distributed from the Prairies and central Boreal Forest west to Alaska. North American birds winter along the Pacific Coast from the Aleutian Islands south to Baja California, as well as the Atlantic Coast and in some inland areas (Stedman 2000).

Distribution, Abundance, and Habitat Horned Grebes are confirmed breeders in sparsely distributed clusters east of the Coast Mountains with notable gaps through the Sub-boreal Interior and Northern Boreal Mountains ecoprovinces. Clusters of confirmed and probable breeding were in the Peace River lowlands, the Cariboo, and across the Thompson-Nicola plateau. Elevation data were limited, but ranged from about 450-900 m in the interior down to 150 m along the Skeena valley in the Coast Mountains. This breeding distribution is similar to that shown when The Birds of British Columbia was published in 1990, except that fewer records and less nesting evidence were found during the Atlas surveys on the plateaux and in the valleys of the Southern Interior and Southern Interior Mountains ecoprovinces.

The Probability of Observation for Horned Grebes is low everywhere, but highest in the Peace River lowlands of the Boreal Plains Ecoprovince. The PObs values for the Taiga Plains and Central Interior ecoprovinces were similar but dropped significantly for the more southerly ecoprovinces. This is consistent with recent challenges in trying to find Horned Grebes during the nesting season in southern British Columbia, possibly suggesting a reduced distribution across southernmost parts of the province, and/or reflecting that Atlas surveys of sites where the species breeds irregularly were limited or coincided with lean years.

Conservation and Recommendations The Horned Grebe has recently been listed by COSEWIC (2009) as Special Concern due to ongoing, range-wide, long-term declines, which sparse Breeding Bird Survey data suggest may be steeper in British Columbia than elsewhere. Threats include loss of wetlands during droughts, degradation of wetland breeding sites, and increasing nest predators (chiefly on the Prairies). Conservation and maintenance of healthy wetlands for breeding must be an essential part of any conservation strategies for this species. Targeted surveys should be undertaken for this species in British Columbia to better understand its status, habitat requirements, and responses to change on the edge of its main range.