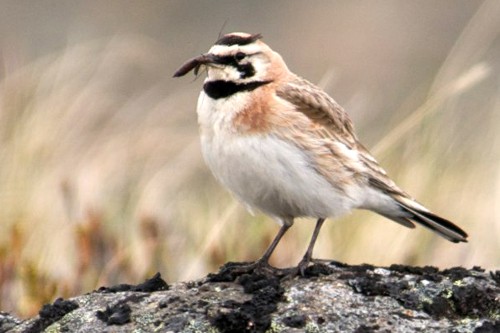 Characteristics and Range North America's only native lark, the Horned Lark, is one of the world's most eye-catching when in breeding-plumage. Its striking masked, black, white and soft yellow head pattern is accentuated by black feather tufts, usually held erect by males on either side of its crown, and after which the bird is named. It has a Holarctic distribution, occurring across Europe, Asia, north Africa, the Middle East, and North America with an isolated population in the Colombian Andes. All temperate and northern populations are short- to medium-distance migrants. Those in North America breed in all manner of open country across arctic, prairie, western and southern biomes and overwinter in the southern part of the continent (Beason 1995). Three of the more than 20 North American subspecies breed in British Columbia: E. a. strigata of coastal prairie habitats in the Pacific Northwest is Endangered and may already be extirpated from the province (Environment Canada 2014).

Distribution, Abundance, and Habitat Horned Larks are distributed through alpine regions of most of British Columbia's higher mountain ranges (the "Pallid" Horned Lark E. a. arcticola), and in open grassy landscapes and wider valley systems of the central and southern interior plateaus (the "Dusky" Horned Lark E. a. merrillii). Atlas records appear generally more sparse than depicted through the 20th Century in Campbell et al. (1997). In some areas local range contractions may have occurred, but in others, especially alpine regions, this probably reflects the limited Atlas survey effort at high elevations. Atlas surveys have, however, expanded the known breeding distribution in the ranges of the East Kootenay and along the Southern Rocky Mountain Trench.

The Probability of Observation model shows the most extensive areas where the species is most likely to be found are the plateau and Coast Mountains rain shadow areas of the Central Interior Ecoprovince, the Omineca-Cassiar Mountains and Stikine-Yukon Plateau in the Northern Boreal Mountains, and the ranges of the Southern Interior Mountains Ecoprovince. Campbell et al. (1997) considered Horned Larks most numerous in the Central Interior Ecoprovince. Atlas point count data are too few to draw firm conclusions, but suggest that alpine habitats (above 2,000 m) support much higher abundance than mid-elevation grasslands.

The two extant breeding subspecies use entirely different habitats, although can occur within a few hundred metres elevation of each other. The alpine E. a. arcticola breeds above treeline in rocky meadows and tundra habitats with few or no shrubs. The lower elevation E. a. merrillii breeds in mid-elevation grasslands, especially heavily grazed areas, whilst E. a. strigata preferred coastal short grass and herbs on dry sandy soils (Campbell et al. 1997).

Conservation and Recommendations Horned Larks have undergone declines in parts of North America where native grasslands have been lost to agriculture, and where marginal agricultural areas have reverted to scrub and forest (Environment Canada 2011). The effects of climate change will likely negatively impact available habitat for alpine and tundra breeders as shrubby habitat increases, but may increase habitat for grassland breeders. Specific conservation recommendations for the E. a. strigata subspecies are detailed in the recovery strategy (Environment Canada 2014).

Peter J. A. Davidson and Nancy A. Mahony