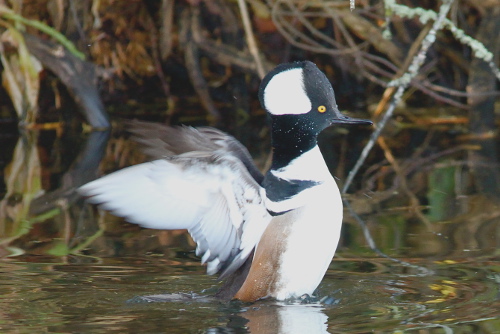 Characteristics and Range This smallest of three North American mergansers, the Hooded Merganser, with its flashy white, fan-shaped crest bordered by black, and buffy sides with black and white vertical stripes, is one of our most attractive waterfowl. It is the only merganser restricted to North America, where it breeds throughout the forested east and Pacific Northwest, generally avoiding prairie grasslands and western deserts, and is most common in forested regions around the Great Lakes. It winters throughout much of the breeding range and south to Mexico in the west and the Gulf Coast in the east (Dugger et al. 2009, Johnsgard 2010).

Distribution, Abundance, and Habitat The Atlas showed the Hooded Merganser to be a widespread breeder across the southern two-thirds of British Columbia, its distribution rather abruptly bounded by 57°N, although breeding has been recorded in Alaska (Dugger et al. 2009) suggesting the species may occur farther north in this province. The Atlas confirmed breeding on northern Vancouver Island, along the Central Coast and, most notably, in the Peace River lowlands, regions where it was not reported when The Birds of British Columbia was published in 1990, suggesting a slight westward and northward range expansion. Most nesting was below about 750 m.

The species was generally uncommon, as noted by Campbell et al. (1990), with highest Probability of Observation in the Georgia Depression, Central Interior and Southern Interior Mountains ecoprovinces, in lower elevation valley systems providing favourable habitat. The Hooded Merganser populations in coastal and interior British Columbia Have more than doubled since 1970 (NABCI-Canada 2012).

The Hooded Merganser is closely tied to forested wetland systems and prefers to nest in densely wooded streams or small wetlands where there is little human disturbance or activity; older forests are preferred. It uses both freshwater and brackish sites with wooded shorelines for cavity nests in both live and dead trees; man-made nest boxes are also used.

Conservation and Recommendations Given how well it is doing in British Columbia and across Canada, based on Breeding Bird Survey and other monitoring results, there are no overall conservation concerns for this species.