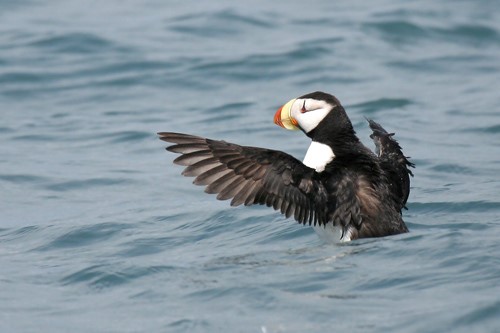 Characteristics and Range Widely distributed in subarctic and North Pacific Ocean waters off the coasts of Alaska and eastern Asia, the Horned Puffin reaches the southern limits of its breeding range in British Columbia (Piatt and Kitaysky 2002). It spends the winter in deep waters of the central North Pacific. Like all puffins, the Horned Puffin is striking and unmistakable. It is a generalist feeder that forages mainly in deep oceanic waters far from shore and nests in rock crevices on remote islands (Piatt and Kitaysky 2002).

Distribution, Abundance, and Habitat There is only one confirmed British Columbia breeding record for Horned Puffin, at S'Gang Gwaay, off the southwest corner of Haida Gwaii, although small numbers probably have bred at several other sites along the coast (Campbell et al. 1990). During the Atlas years, breeding evidence was obtained at three sites: Cape St. James and the Kerouard Islands, both at the south end of the Haida Gwaii archipelago, and Triangle Island where appreciable numbers (tens) occur in all years in suitable nesting habitat and are regularly seen delivering fish to probable nests (rock crevices high up on steep cliffs).

This is a rare species at any time in the temperate waters off the British Columbia coast. Breeding colonies throughout the species' range are generally located on remote islands that are unlikely to have human visitors. There are just 3 island groups designated as Important Bird Areas in British Columbia that support breeding Horned Puffins (IBA Canada 2015).

For nesting, the Horned Puffin uses crevices in talus slopes, on cliffs (as at Triangle Island), and amid beach boulders, on remote, rocky islands.

Conservation and Recommendations Throughout its range, the Horned Puffin is potentially vulnerable to human disturbance, oiling at sea, fisheries operations, and introduced predators; especially rats (Rattus species) and Raccoons (Procyon lotor) which have decimated some British Columbia seabird colonies. Relative to most other auks, a relatively high proportion (37%) of individual Horned Puffins had plastic particles in stomachs in Alaskan waters in the late 1980s (Robards et al. 1995).