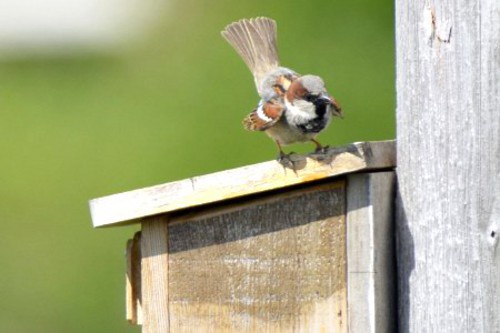 Characteristics and Range This old-world sparrow is one of the most familiar urban birds. The House Sparrow was introduced to North America around 1850 but is now resident in populated areas throughout the continent, south of the Boreal Forest (Lowther and Cink 2006). Native and resident across northern Eurasia south to northern Africa and south-east Asia, its adaptability and preference for human habitats have given this species a nearly worldwide distribution.

Distribution, Abundance, and Habitat The House Sparrow likely arrived in British Columbia in the 1890s (Campbell et al. 2001) and is now an increasingly widespread resident in settlement and farmland areas across southern British Columbia, distributed more locally in the interior, and absent only from northwestern British Columbia and Haida Gwaii. Generally, Atlas surveys show the distribution to be similar to that reported in The Birds of British Columbia but expand the confirmed breeding range northward in the Coast and Mountains Ecoprovince (northern Vancouver Island and northern mainland coast).

The highest Probabilities of Observation and abundance are at low elevations in the Georgia Depression Ecoprovince, as noted by Campbell et al. (2001). Secondary high Pobs and abundance values occur in the Okanagan, Thompson and Fraser valley floors in the Southern Interior and locally in the Boreal Plains ecoprovinces; however, abundance in these areas is less than half that found in the Georgia Depression.

The House Sparrow is a cavity nester and is strongly associated with human-modified environments and microhabitats.

Conservation and Recommendations Populations of the House Sparrow in British Columbia are relatively stable (Environment Canada 2014) but in Canada have undergone a significant decline since 1970 (Environment Canada 2011); the declines are worldwide, and are likely related to changes in farming practices and transportation (Lowther and Cink 2006). In British Columbia, the House Sparrow is an invasive species which breeds early and often outcompetes native cavity nesters by usurping potential nest cavities and establishing nests prior to the native birds' arrival. It is difficult to discourage but the best strategies are, where possible, to restrict the entrance size in nest boxes to permit use by native species but exclude the House Sparrow, or to place nest boxes intended for other species >100 m distance from preferred House Sparrow habitat such as farmsteads.