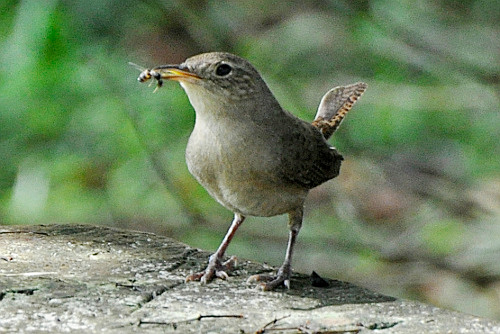 Characteristics and Range This small but charismatic wren has a strong affinity for human modified environments and is partial to nesting in man-made structures. Partly as a consequence, it is one of the most comprehensively studied birds in the world. North American birds breed from coast to coast across central parts of the continent and migrate short to medium distances to overwinter mainly from the Southern Coastal Plains and arid southwestern United States south through much of Mexico. British Columbia marks the northernmost limit of the House Wren breeding range, where it is probably limited by nocturnal temperatures in early to mid-summer (Johnson 2014). No less than 31 subspecies are recognised, mostly resident forms that occur through the Caribbean and South America.

The three main areas where House Wrens are most likely to be found are: the Okanagan, Similkameen and Thompson-Nicola valley systems; southeast Vancouver Island and the southern Gulf Islands; and the Peace River lowlands. Point count data indicate that local abundance is highest in the Georgia Depression and a restricted area of the Kootenay River valley in the Southern Interior Mountains, and relatively high in the Southern Interior and Boreal Plains ecoprovinces. The species occurs over the widest area in the Southern Interior, which continues to support the largest proportion of the provincial population, as noted in Campbell et al. (1997).

In southwest British Columbia, the House Wren is much more common in Coastal Douglas-fir than any other biogeoclimatic zone, and in the southern interior they are most abundant in the Interior Douglas-fir biogeoclimatic zone. In both regions they prefer lower elevations, being most abundant below 500 m. Preferred habitats include open drier woodlands like Garry Oak (Quercus garryana), Ponderosa Pine (Pinus ponderosa) and Douglas-fir (Pseudotsuga menziesii), woodlots, riparian deciduous and mixed forest edges, blackberry (Rubus species) tangles, farmyards, hedgerows, orchards, and gardens in rural and suburban areas. It nests in cavities and crevices (including in walls and outbuildings) and readily accepts nest boxes.

Conservation and Recommendations There are no conservation concerns for House Wren. Long-term population trends are stable and it is adaptable to a wide variety of human-modified environments. However, House Wren may be a conservation concern for the Bewick's Wren. In parts of southern and eastern North America, Bewick's Wren populations have declined through competition with egg-removing House Wrens (Kennedy and White 1996). Whether this occurs in British Columbia has yet to be determined.