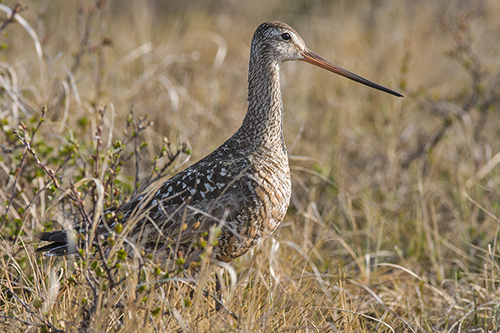 Characteristics and Range This remarkable, long-distance migratory shorebird uses fewer sites through the course of its annual cycle than most other migratory species. It breeds in three widely-segregated areas of subarctic North America: southwest Hudson and James bays; the Mackenzie and Anderson river deltas; and pockets of wetland habitats in Alaska. It stages at very fewer stopover sites in spring and fall, and makes nonstop flights of several thousand kilometres to overwinter in three main areas of coastal mudflat in southern South America (Walker et al. 2011). Its global population is estimated at only 50,000-70,000 birds (Senner 2010).

Distribution, Abundance, and Habitat The Hudsonian Godwit is a very localized and rare breeder in British Columbia: one documented breeding record and three observations of pairs, during the 1960s, 1980s and 1990s, indicates a tiny population occurs in the Chilkat Pass area of the Haines Triangle (Campbell et al. 1990; Walker et al. 2011). The species was not recorded during the Atlas despite survey effort in and around this same area.

In British Columbia and adjacent Alaska, it breeds in boggy, muskeg and wet grassy habitats including sedge (Carex) meadows admixed with shrubs, dwarf trees and ponds, at or near treeline (Campbell et al. 1990, Walker et al. 2011).

Conservation and Recommendations Birders are strongly encouraged to more extensively explore and survey the Haines Triangle and adjacent regions of far northwestern British Columbia, to clarify the breeding status of Hudsonian Godwit and several other species recently proven or thought to breed in this ecosystem complex that is rather unique within British Columbia. Its small population means that any advances in breeding location knowledge could be helpful to the conservation of the species (Senner 2010).