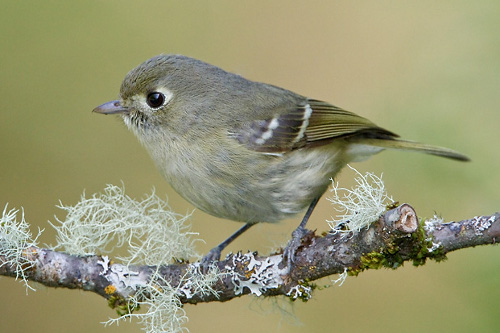 Characteristics and Range This diminutive and unobtrusive vireo, which at a glance can be mistaken for a Ruby-crowned Kinglet, is the only largely sedentary vireo north of Mexico (Davis 1995). Being a resident bird, it starts delivering its loud, strident song phrases early in the season, brightening up Metro Vancouver and Vancouver Island parks on warmer February and March days. It ranges through westernmost North America's mixed forests, from southwest British Columbia to the Mexican Sierra Madre. Two subspecies occur at the northern limit of the range in southern British Columbia: V. h. insularis, which is endemic to Vancouver Island, and V. h. huttoni on the mainland.

Distribution, Abundance, and Habitat The Hutton's Vireo is confined to the Georgia Depression and adjacent southernmost Coast and Mountains ecoprovinces, where it is widely distributed on Vancouver Island, the Gulf Islands and adjacent lower elevations on the British Columbia mainland. This range is unchanged since The Birds of British Columbia was published in 1997. An exceptional report along the lower Thompson River was most likely a non-breeding individual that dispersed up the Fraser Valley.

Hutton's Vireos are not particularly common anywhere, but are most often encountered around southeastern and western coasts of Vancouver Island, on the Gulf Islands, and across the Fraser River delta north to the Sunshine Coast. Atlas point count data show they are most numerous below 250 m, and suggest that local abundance is slightly higher in the Coast and Mountains ecoprovince than in the Georgia Depression, and similar in the Coastal Douglas-fir and Coastal Western Hemlock biogeoclimatic zones. However, the time period (28 May-10 July) on which abundance is based is later than the peak period of Hutton's Vireo singing (Campbell et al. 1997); this may have resulted in lower detection rates, especially in the Georgia Depression (Hutton's Vireos may breed later in the Coast and Mountains Ecoprovince). Atlas reports suggest that the species could occur as high as 600 m, which is much higher than the highest confirmed nest at 240 m (Campbell et al. 1997).

Conservation and Recommendations This bird's natural low density means that it is not well sampled by existing monitoring efforts, although Breeding Bird Survey and Christmas Bird Count data suggest it may be slightly increasing over the long-term (Environment Canada 2011). A large portion of its limited British Columbia range overlaps with heavily populated areas, and although there are no major conservation concerns for the species, the preservation of mixed wood habitats with well-developed understories will be key to maintaining present populations.