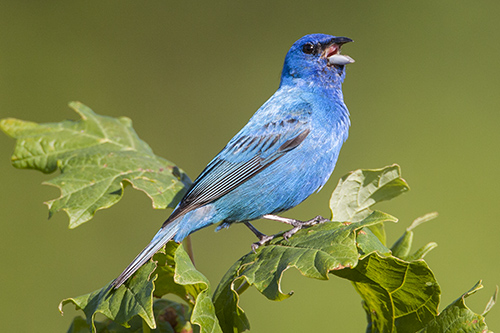 Characteristics and Range This small, bright blue bunting is best known to residents of eastern North America, where it sings persistently throughout the breeding season. The brilliance of the male's dark blue plumage contrasts with the generally drab browns of the females. The breeding range extends from the eastern Prairies and Great Lakes south to the Southern Coastal Plains. Indigo Buntings winter from southern Florida through the Caribbean, southern Mexico, and Central America to Panama and northern South America (Payne 2006).

Distribution, Abundance, and Habitat Indigo Buntings are rare summer visitors to B.C. with all historic and recent observations being made south of about 51°N. During the Atlas surveys, Indigo Buntings were observed in the southern extremes of the province in the Southern Interior, Southern Interior Mountains and Georgia Depression ecoprovinces, including Vancouver Island. Breeding was confirmed in the Southern Rocky Mountain Trench. Elevation data for the few sightings ranged from sea level to about 1,000 m. Occurrences during the Atlas surveys were all within the range shown when The Birds of British Columbia was published in 2001, but were fewer and less extensively distributed. This is to be expected given that the Atlas survey period was 5 years as opposed to the much longer time period collated for The Birds of British Columbia, however, the latter only documented one confirmed breeding record for the province.

Indigo Buntings are generally birds of open, brushy habitats around old fields, road margins, rangelands, riparian woods and openings in second-growth forests. Willow (Salix) and birch (Betula) species, and Saskatoon (Amelanchier alnifolia) have been noted as associated vegetation (Campbell et al. 2001). Birds seem to use habitats consistent with general descriptions found in Payne (2006). In British Columbia, as in other parts of the west, habitats may overlap with those used by Lazuli Buntings, thus facilitating the known instances of hybridization in the province (Wideski and Davidson 2010) and other places where the ranges of the two species overlap.

Conservation and Recommendations Indigo Buntings are not of conservation concern in British Columbia and global responsibility has not been determined for the province. National Breeding Bird Survey data indicate a moderate increasing trend for Canada, but too few encounters have occurred along survey routes in British Columbia to determine a trend for the province. This bunting appears to benefit from seral stage shrub habitats on disturbed sites, but habitat loss from successional changes and urbanization, agriculture and roadside brush management can result in population declines as well. No conservation actions are recommended.