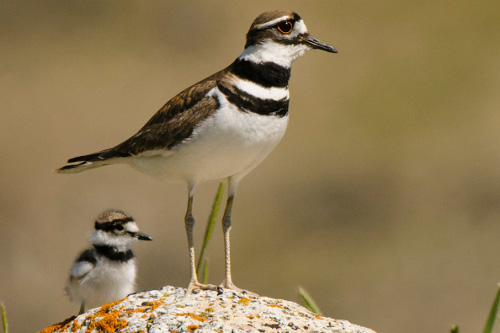 Characteristics and Range The Killdeer is probably the shorebird best known to the general public. This loud and conspicuous plover seems equally at home nesting on wilderness gravel bars or in human-modified habitats such as cropland, golf courses, and even building sites that support its insectivorous diet. The breeding range extends across most of North America south of northern boreal regions; there are also breeding populations in the Caribbean and at disjunct locations in South America (Jackson and Jackson 2000). Killdeer breeding in the British Columbia interior migrate south or to the coast, whereas Killdeer are present year-round on the British Columbia coast (Campbell et al. 1990).

Distribution, Abundance, and Habitat The Atlas probably covered the breeding distribution of Killdeer well, given their conspicuous nature and affinity for human-modified habitats. The Atlas breeding records match those collated by Campbell et al. (1990) quite closely. Most Killdeer breed in the southern third of the province, with concentrations in the Georgia Depression and lowland areas in the Central Interior, Southern Interior and Southern Interior Mountains Ecoprovinces. In general this mirrors the distribution of agriculture and human habitation.

Despite its conspicuousness, Killdeer is not an abundant species in British Columbia and in most areas was recorded on less than 1% of point counts. Areas of high Probability of Observation match the distribution of confirmed or probable breeding records, although the highest concentrations away from the Chilcotin Plateau (e.g., south and east Vancouver Island, and the lower Fraser and Okanagan valleys) are not as clearly evident on the map because of the narrow habitat zones the species occupies. Killdeer abundance is highest below 500 m elevation. Abundance is slightly higher in the Georgia Depression than in other ecoprovinces, although point count sample sizes are small.

Killdeer typically nest on gravelly substrates, often near a water source, and generally where there is sparse or low vegetation cover (Campbell et al. 1990, Jackson and Jackson 2000). Killdeer in British Columbia Breed in a wide range of biogeoclimatic zones, but because most of their nesting is in open, sparsely-vegetated or modified habitats, these ecozones do not provide a reliable description of their micro-habitat use.

Conservation and Recommendations Killdeer, with an estimated population of two million in North America, is probably more common now than in historical times because of habitat changes by humans, but there is evidence of recent declines in parts of its range, including Canada (Jackson and Jackson 2000, Andres et al. 2012). The species is considered to have a secure population globally, in Canada, and in British Columbia. Pesticides, nest destruction by lawnmowers and other agricultural equipment, and mortality from collisions with vehicles are currently the greatest threats (Jackson and Jackson 2000).