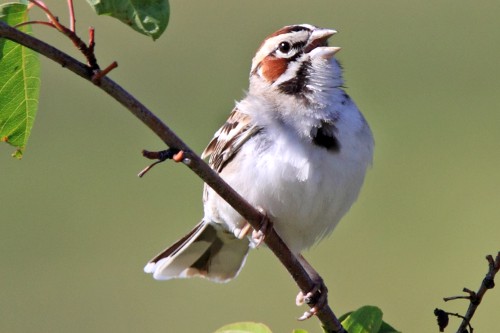 Characteristics and Range Visitors to the South Okanagan Valley shrublands may have encountered this large, brightly coloured sparrow with its striking chestnut, black, and white patterned face, and blackish tail with white tips and outer feathers. It has a sweet, lark-like song, given at times in flight, from which it gets its name. The Lark Sparrow is unique among sparrows in passing a twig from male to female during its elaborate, turkey-like strutting display. Its range is entirely restricted to North America, where it breeds in open dry lands in western and prairie biomes. It is a short- to medium-distance partial migrant, being sedentary in parts of its range, but makes a complete migration between northern and central portions of the range and wintering areas in southern and western Mexico (Martin and Parrish 2000).

Distribution, Abundance, and Habitat The Lark Sparrow was historically widespread from the Thompson to the North and South Okanagan (Cannings et al. 1987, Campbell et al. 2001). The Atlas confirms that this range is still occupied, that breeding occurs farther north than was previously known in the Cariboo, but also suggests that the species is not as widespread in the Thompson and central-north Okanagan regions as it once was. One or two pairs were confirmed or probable breeders in the West Kootenay and East Kootenay. Some of the scattered possible breeding records may refer to overshooting spring migrants.

The centre of its provincial abundance, in the Lower Similkameen, Richter Pass, and Osoyoos Lake areas of the Southern Interior ecoprovince, does not appear to have changed since The Birds of British Columbia was published in 2001.

The Lark Sparrow is largely restricted to shrub-steppe grassland with perennial grasses, open ground, Antelope Brush Purshia tridentata and sparse Big Sagebrush Artemisia tridentata (Campbell et al. 2001). It is a bird of low elevations in the interior, usually found along the valley bottoms, but also occurs on suitable higher slopes, e.g., Anarchist Mountain. Atlas point counts showed that it is most abundant in Bunchgrass and Ponderosa Pine biogeoclimatic zones, and twice as common below 500 m, than above that elevation.

Conservation and Recommendations The recent acquisition by the Nature Conservancy of Canada of some significant habitat for this species has reduced threats in an important portion of its provincial range, and in 2015, the British Columbia Conservation Data Centre moved the Lark Sparrow from the Red List (Threatened) to the Blue List (Vulnerable). Fewer Lark Sparrows nest near vineyard edges than further away, and nest predation is higher near orchard edges (Knight et al. 2014). Other possible factors negatively impacting the provincial population include cattle grazing, pesticide spraying, and domestic and feral cat predation (British Columbia Conservation Data Centre 2014).