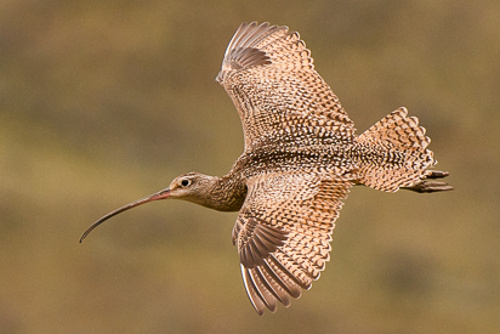 Characteristics and Range The Long-billed Curlew is North America's largest shorebird, with an extraordinarily long bill adapted for extracting worms from grasslands and pastures, and shrimp and crabs from tidal flats. It is one our earlier-returning, shorter-distance migrants. Its aerial displays, mournful yodelling song, and rich cinnamon plumage brighten early spring days across the Prairie, Great Basin and inter-montane valley regions of western North America. It winters along the Pacific Coast and the southern plains south to Mexico's Yucatan Peninsula. Over the past 150 years, the Long-billed Curlew population in North America has declined and its range has contracted, initially driven by harvest for consumption, and then by agricultural intensification and urban expansion (Dugger and Dugger 2002). However, in British Columbia, it is a different story: the curlew has actually been expanding across the province over that time period.

Distribution, Abundance, and Habitat In British Columbia, its breeding range is restricted to valley floors and open grasslands of the central-southern interior. The Atlas documented an apparent northward and westward range expansion since The Birds of British Columbia was published in 1990, with new clusters of breeding season records along the Fraser River in the Rocky Mountain Trench, around the Fraser-Nechako river confluence west to Burns Lake, and on the western Chilcotin Plateau. Local increases are apparent along the middle Fraser River also, e.g. near the Fraser-Bridge river confluence, but the Atlas records show fewer breeding season locations in the North Okanagan and Shuswap regions, suggesting a local decline there.

The centre of abundance remains in the Fraser Plateau region of the Central Interior Ecoprovince, highlighted by the most extensive high Probability of Observation values, and suggested by the small sample of point counts. The Southern Interior Mountains (Creston Valley and Robson Valley sections of the Rocky Mountain Trench) and Sub-boreal Interior (Fraser-Nechako region) ecoprovinces support less extensive but similarly high Pobs values.

The Long-billed Curlew nests in shorter vegetation, preferring open grassland with few trees and lower densities of tall grasses and shrubs, e.g., sagebrush (Artemisia species) (Dugger and Dugger 2002). Locally, however, it also nests in crops; recent work in Alberta reported high use of a cropland-dominated landscape nearby to native grassland (Devries et al. 2010). During the Atlas survey period, nests were not found in crops, but curlews were observed displaying and with fledged young in Alfalfa (Medicago sativa) and hay fields adjacent to native grassland or shrubland; Campbell et al. (1990) note that wetter areas and hayfields are used for chick rearing.

Conservation and Recommendations The species has been listed as Special Concern by COSEWIC since 1992 and the federal Species at Risk Act since 2005, primarily due to range contractions, small population size, and ongoing concerns about habitat loss and degradation on both breeding and wintering grounds (Environment Canada 2013). The apparent range expansion in British Columbia is encouraging, and should continue to be monitored. The use of cropland as a breeding habitat in British Columbia should be a research priority.