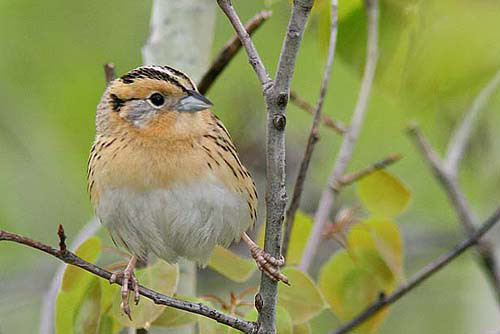 Characteristics and Range Its mouse-like behaviour and thin, insect-like song combine to make the Le Conte's Sparrow an easily overlooked species. When luck and patience combine to allow a detailed view of this elusive sparrow, it's relatively colourful plumage comes as a surprise. The Le Conte's Sparrow breeds mainly in northern prairie and central boreal grasslands, reaching the western limit of its range in northeastern British Columbia. It is also found in small, widely separated pockets farther to the east of this main range, and winters primarily in the United States Southern Coastal Plains, centred on the lower Mississippi Valley and Gulf Coast (Lowther 2005).

Distribution, Abundance, and Habitat Within British Columbia, the Le Conte's Sparrow is found almost exclusively in the northeast, with a few isolated records from the upper Fraser, Thompson and Columbia valleys in the Southern Rocky Mountain Trench. This is consistent with the range described when The Birds of British Columbia was published in 2001, although the Atlas has filled gaps within this range. Due to its secretive habits, the Le Conte's Sparrow may have been overlooked in some squares where it was present. However, the general distribution pattern presented in the Atlas is likely accurate.

The Le Conte's Sparrow is most often found near sedge meadows and similar open, damp habitats. Occasionally it may be found in upland sites such as hayfields, and it is known to respond quite dramatically to local conditions, being much more common in wetter years when it uses sites typically avoided under normal conditions (Phinney 1998, Lowther 2005).

Conservation and Recommendations Atlas work indicates the Le Conte's Sparrow is more widespread and abundant than was previously believed, and in 2015 its conservation status was re-assessed by the British Columbia Conservation Data Centre, and the species was moved from the British Columbia Blue List (Vulnerable) to the Yellow List (not at risk). Long-term Breeding Bird Survey results suggest a slight population decline for Canada and for the Boreal and Taiga Plains Bird Conservation Region. Large wetlands on public land are generally protected from industrial development by regulation, but habitat on private land can be susceptible to wetland draining, mowing, and higher levels of grazing.