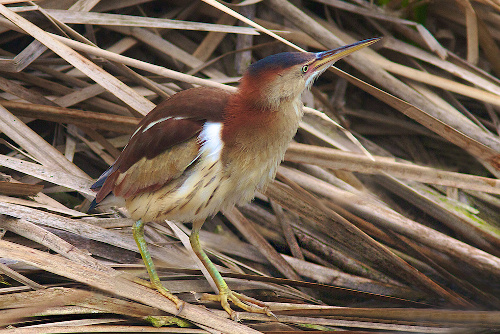 Characteristics and Range Weighing less than a Mourning Dove, the Least Bittern is the smallest member of the heron family. The species is secretive and inconspicuous with a habit of running through dense vegetation and freezing in an upright position in the same manner as the larger American Bittern. Its distribution in western North America is fragmented with isolated breeding populations in the Klamath and Malheur basins of Oregon, the Central Valley and Modoc Plateau of California, and the Colorado River drainage. It is far more widespread in eastern North America where it is found breeding from the Great Lakes and eastern Great Plains south to the Gulf of Mexico and into Central America; populations in northern areas migrate south in winter to avoid prolonged frosts (Poole et al. 2009).

Distribution, Abundance, and Habitat Campbell et al. (1990) regarded the Least Bittern as a casual summer visitor to British Columbia, citing only two records. That status has not changed. The Atlas recorded a single bird on territory at a location in the Southern Interior Mountains Ecoprovince. The bird called repeatedly over a period of several weeks from the same location at a large wetland on private land. Despite knowledge that it was in the area, it was only glimpsed once (Ohanjanian 2015).

Conservation and Recommendations There are no recommendations for conservation as the species occurs only as a casual visitor. However, birders in British Columbia should be aware that this species has been found in the province in the past and that it is probable, given the cryptic nature of the species and difficulty of access to the habitats that the species uses, that some Least Bitterns in British Columbia have been overlooked.