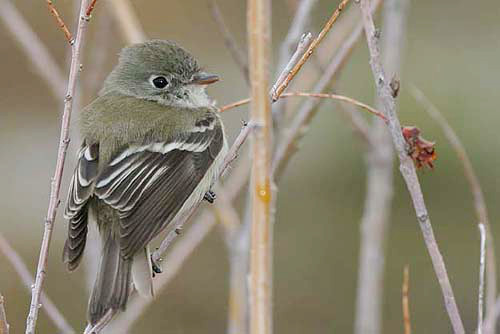 Characteristics and Range The Least Flycatcher is best known for its insistent, sneeze-like "che-bec! " song, which can be repeated hundreds of times without much of a break. The French name for the species "Moucherolle tchébec" is onomatopoeic. It has a wide breeding range, mainly in the eastern deciduous forests, the aspen parkland belt on the Prairies, across the southern Boreal Forest and in western basins and the Appalachian Mountains. It is a medium-distance migrant that winters in Mexico and Central America.

Distribution, Abundance, and Habitat This species is widely distributed in British Columbia east of the Coast and Cascade mountains, but becomes less numerous and more scattered in the far south of the province. Campbell et al. (1997) presented evidence that central and southern British Columbia have been occupied only recently (since the 1950s). Whilst the provincial range has not changed much since The Birds of British Columbia was published in 1997, the Atlas fills distribution gaps across the province, especially in the north and in southern valleys. The species is largely absent west of the Coast and Cascade mountains except along major river valleys including the lower Fraser, Skeena, Nass, and Stikine.

The highest Probability of Observation for Least Flycatcher is in the Fort Nelson and Liard river lowlands of the Taiga Plains and the Peace River lowlands of the Boreal Plains ecoprovinces. However, point counts show that abundance is three times higher in the Boreal Plains, where the species is found in every square with significant coverage. It is also locally quite common in the Northern Boreal Mountains Ecoprovince. The bird is found overwhelmingly at lower altitudes, reaching peak abundance between 250 and 500 m, and is scarce above 1000 m.

The Least Flycatcher is most numerous in stands of Trembling Aspen (Populus tremuloides), a tree which is common through much of the British Columbian interior and especially in the Boreal Plains Ecoprovince. However, it is also found in stands of other poplars such as Black Cottonwood (Populus trichocarpa) and, less often, in stands of other deciduous trees.

Conservation and Recommendations Breeding Bird Survey data indicate a small but steady long-term decline in Least Flycatcher populations (Sauer et al. 2014), including those in British Columbia. However, the species is not yet considered to be at risk either in the United States or in Canada. It is one of many aerial insectivores that are declining (Nebel et al. 2010), but the causes for decline in this species are unclear.