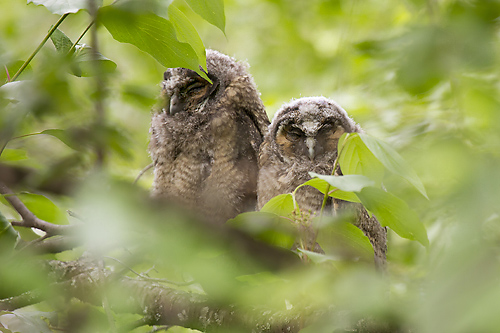 Characteristics and Range Although it is fairly common in some areas of southern British Columbia, the Long-eared Owl is not often seen because of its nocturnal habits, highly cryptic coloration, and penchant for roosting in very dense vegetation. Its long "ear" tufts help break up its silhouette so that it blends in with its twiggy hideaways. Birders who venture out at night in the spring might hear the hollow single hoots of males, or perhaps the loud "Smack!" of a territorial wing-clap overhead. Long-eared Owls are found in temperate forests and woodlands around the Northern Hemisphere, with isolated populations in Africa, the Canary Islands and the Azores. In North America they breed in the western cordillera (generally east of the coast ranges) from northern British Columbia south to the Mexican border, and across the southern Boreal Forest and northern Great Plains to the Great Lakes and east to the Atlantic Coast.

Distribution, Abundance, and Habitat In British Columbia the Long-eared Owl breeds in the interior from the Boreal Plains and Sub-Boreal Interior ecoprovinces south. There was one report of possible breeding from the Georgia Depression ecoprovince in the Squamish Valley. The Atlas indicates a possible expansion of the species' range in British Columbia, with a cluster of confirmed breeding records in the Boreal Plains, something not shown in The Birds of British Columbia when published in 1990. Data are insufficient to develop a Probability of Observation model or calculate abundance, but Long-eared Owls are likely much more abundant in the southern parts of British Columbia than in the central and northern regions.

Conservation and Recommendations Christmas Bird Count and migration monitoring data suggest a moderate decline in Long-eared Owl populations in Canada; there are no specific trend data for British Columbia (Environment Canada 2011). Habitat loss and degradation, particularly grassland and meadow foraging areas and riparian woodlands for nesting and roosting, is considered the most likely cause for these declines (Marks et al. 1994).