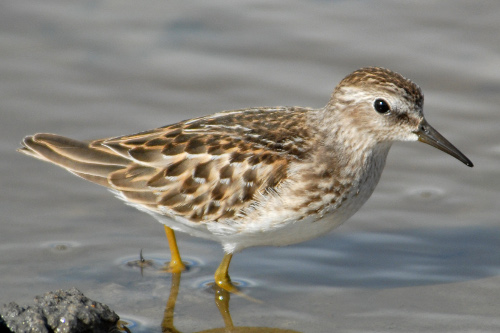 Characteristics and Range The Least Sandpiper has the broadest and southernmost breeding distribution of all the Nearctic Calidris sandpipers (Nebel and Cooper 2008). It mainly nests across northern North America in the subarctic and northern boreal and in coastal and dune systems at the southern extreme of its range on the Pacific and Atlantic coasts (Nebel and Cooper 2008). British Columbian birdwatchers may not immediately think of it as a nesting species in the province; it is encountered by most observers in the province at stopover sites on its long-distance migration from the arctic and subarctic to southern North, Central and South America. Migrants are usually loosely associated with their more numerous congener, the Western Sandpiper (C. mauri).

Distribution, Abundance, and Habitat The principal breeding range of the Least Sandpiper in British Columbia is alpine tundra in the Northwestern Boreal Mountains Ecoprovince, from the far north-western tundra and sedge-shrub meadows of the Chilkat Pass to the Spatzizi Plateau, and an isolated part of Graham Island, Haida Gwaii. Atlas expeditions confirmed breeding further south than noted when The Birds of British Columbia was published in 1990, reaching the southernmost extent of its western breeding range in the Central Interior Ecoprovince, where it is likely a localized breeder. The easternmost and highest elevation records (up to 1,630 m) were from the Omineca Mountains. The westernmost and lowest elevation (down to 900 m) records came from the Chilkat Pass area.

There were insufficient data to model the Probability of Observation. Atlas survey effort was limited in alpine tundra and high elevation wet meadows in central and northern British Columbia. Extensive, suitable habitat potentially exists across this range, and therefore it could be more widespread than the scattered spread of Atlas records indicates. Atlas records of Least Sandpiper came from shrub upland, alpine tundra and wet meadow habitats. The small, disjunct nesting population on the north shores of Graham Island, Haida Gwaii nests near sea level in damp open areas between Delkatla and Skonun Point.

Conservation and Recommendations Prior to tidal restoration to Delkatla Wildlife Sanctuary, Haida Gwaii, in 1995, the area was home to one of the larger southerly nesting populations in North America with over 100 nesting pairs (Nebel and Cooper 2008). Since tidal inundation however, numbers have undergone a sharp decline. Conservation of remaining suitable habitat on Graham Island, Haida Gwaii is important to protect this population. Climate change projections for British Columbia suggest a substantial decrease in alpine habitats favoured by Least Sandpiper over the next century (Hamann and Wang 2006); long-term changes throughout the breeding and wintering grounds may place this and other arctic shorebirds under considerable pressure, which could negate any short-term benefit of possible increases in both survival and productivity under a milder climate (Meltofte et al. 2007). Further surveys at appropriate elevations in British Columbia's shrub upland and tundra habitats would improve knowledge of the Least Sandpiper's provincial range.