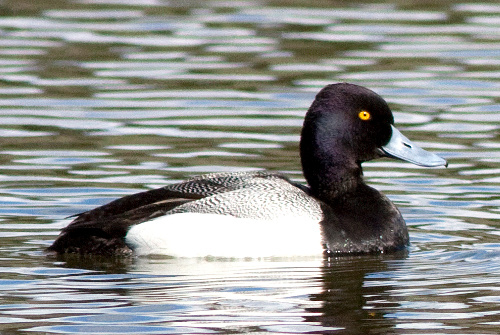 Characteristics and Range It takes a practiced eye to separate the Lesser Scaup, male or female, from its close relative the Greater Scaup. This similarity not only frustrates many birders but leads to reduced information on the population size, trends and distributions of the two species; many census counts simply combine the scaup species. Across its range, the Lesser Scaup is generally more common than the Greater Scaup. Restricted to North America, the breeding range of the Lesser Scaup spans the Boreal Forest east to the Great Lakes, the northern Prairies, and the Great Basin (Austin et al. 1998). Many Lesser Scaup winter around the Gulf of Mexico, but large numbers also winter along the Pacific and Atlantic coasts, and on ice-free waters in the continental interior.

Distribution, Abundance, and Habitat The Lesser Scaup is a widespread breeder in the province, unlike its close relative the Greater Scaup which has not been confirmed to breed here. The distribution of Lesser Scaup breeding records from the Atlas surveys match those in Campbell et al. (1990) quite closely, suggesting there has been no appreciable change in distribution. The main clusters of nesting occur across the Chilcotin and Cariboo plateaus into the Thompson River drainage, in the Peace River lowlands, and in the northwest Northern Boreal Mountains Ecoprovince. Although this species is common during winter in coastal regions, it does not breed there; two Atlas records along the Skeena River valley probably represent late migrating birds.

The most extensive area of high Probability of Observation match the distribution cluster across the Central Interior and Southern Interior ecoprovinces. The PObs modelling also predicts high PObs values in the upper Stikine River catchment, an area poorly sampled by Atlas surveyors due to its remoteness. The elevation range confirms that given by Campbell et al. (1990): highest abundance occurs in the 500-1,500 m range, although the Atlas sample size for abundance analysis was small, and the Lesser Scaup is not well sampled by randomized point counts because of its localized wetland occurrence.

Conservation and Recommendations The Lesser Scaup is considered the most abundant diving duck in North America with over 5 million birds in past years (Austin et al. 1998). Since the 1970s, counts of scaup (the two species cannot be differentiated in aerial surveys) show significant declines across the breeding range, although there has been some recovery since 2004 (Fast et al. 2011, CWS Waterfowl Committee 2013). Declines appear to be due to reduced breeding recruitment, possibly linked to increased drought conditions, wildfires, logging of boreal forests, and acid rain, but contamination from winter food might also affect body condition and hence breeding success (Austin et al. 1998). Future Atlas surveys in British Columbia will therefore be valuable in tracking changes in scaup breeding distribution and densities.