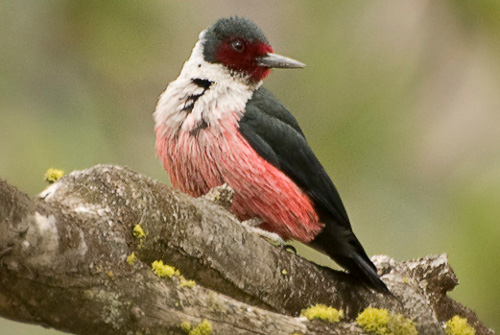 Characteristics and Range Looking like a small crow with a red face and pink undersides and a habit of foraging for flying insects with acrobatic flights, the Lewis's Woodpecker is the province's most unusual woodpecker. Its breeding range is restricted to parts of western North America, approximately matching the distribution of Ponderosa Pine (Pinus ponderosa), extending from southern British Columbia through some western cordilleras and plateaus to southern New Mexico and California (Vierling et al. 2013). Most birds that breed in the northern half of this range migrate short distances to winter farther south.

Distribution, Abundance, and Habitat In British Columbia, the current primary range is in the valleys of the dry southern interior. Breeding has expanded farther north in the Central Interior and the Southern Interior Mountains ecoprovinces since The Birds of British Columbia was published in 1990, but there is no Atlas evidence of breeding in coastal areas. The species has not recolonized the coast since its collapse there in the 1940-1960's (Campbell et al. 1990, COSEWIC 2010, Siddle and Davidson 1991). Surveys for this species by volunteers and provincial and federal governments in preparation for a management plan, combined with the bird's visible nature, meant that Atlas coverage was excellent and confirmed breeding was found in 77% of 10-km squares with Lewis's Woodpecker observation, one of the highest proportions of confirmed breeding found for any species during the Atlas.

The core of the provincial population is in the Southern Interior Ecoprovince: highest Probabilities of Observation and abundance are in the central-southern Okanagan and Similkameen valleys, the Thompson-Nicola and middle Fraser valleys. An area of similar abundance but slightly lower Pobs values is found in the Southern Rocky Mountain Trench. The total number of breeding Lewis's Woodpeckers in the province is 315-460 pairs (Environment Canada 2014).

Atlas records are all from below 1,230 m in elevation and the majority are below 1,000 m, and almost entirely from the Ponderosa Pine, Interior Douglas-fir and Bunchgrass biogeoclimatic zones. The Lewis's Woodpecker favours open Ponderosa Pine woodland including recent burns, sparsely treed grassy slopes and riparian strips of Black Cottonwood (Populus trichocarpa) with exposed snags.

Conservation and Recommendations A management plan has been developed for Lewis's Woodpecker (Environment Canada 2014) that outlines best management practices, develops goals and lists strategies for recovering the species. The objective of the plan is to increase the British Columbia population to 600 pairs by 2040. The species is listed as a species at risk under the British Columbia Forest and Range Practices Act and over 2,200 ha in 88 areas have been set aside as Wildlife Habitat Areas for this species (British Columbia Ministry of Environment 2015).