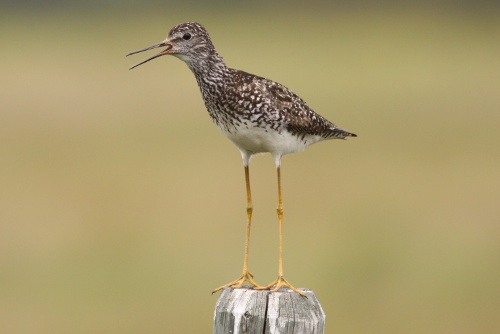 Characteristics and Range This slim, elegant shorebird breeds only in North America, in boreal regions from western Alaska to James Bay (Tibbitts and Moskoff 2014). Northern British Columbia is on the southern edge of its breeding range, but it is a common migrant through the province. It winters from the Southern Coastal Plains of the United States through South America, with the highest concentrations in northern South America, especially Surinam.

Distribution, Abundance, and Habitat Lesser Yellowlegs nest north of 55°N in British Columbia, mostly in the Taiga and Boreal Plains, and northwestern Northern Boreal Mountains ecoprovinces. The Atlas distribution matches that shown by Campbell et al. (1990), but also reveals new evidence of nesting south of 55°N, on the Fraser and Chilcotin Plateaus. These southern sites represent an expansion of the species' known range, likely the result of increased sampling effort. Nesting distribution may be more widespread than indicated in the Northern Boreal Mountains Ecoprovince, because these relatively inaccessible highlands could not be fully sampled by the Atlas.

Even within areas of relative concentration, the Lesser Yellowlegs is an uncommon, low density breeder in British Columbia. The highest Probabilities of Observation generally match concentrations of confirmed and probable breeding records, except in the Taiga Plains Ecoprovince where Pobs values are higher than the breeding evidence suggests. The highest abundance is in the 1,250-1,500 m elevation range, somewhat higher than Campbell et al. (1990) reported (750-1,200 m), but atlassing also shows moderate relative abundance at mid-elevations (250-1,250 m), based on small sample sizes.

The Atlas data indicate a strong preference for nesting in higher elevation, boreal biogeoclimatic zones dominated by spruce (Picea) and pine (Pinus) species. Lesser Yellowlegs tend to nest near shallow water-bodies in semi-open coniferous woodlands including bogs, muskeg and meadows (Campbell et al. 1990; Tibbitts and Moskoff 2014). Nests tend to be made in drier parts of their nesting habitat but the birds feed and raise their chicks along the shores of ponds, lakes and wet marshes, taking aquatic and shoreline insects, crustaceans, worms, spiders and small fish (Tibbitts and Moskoff 2014).

Conservation and Recommendations Atlas data show the Lesser Yellowlegs as a more abundant and widespread breeder within British Columbia than previously indicated (Campbell et al. 1990). This might simply reflect increased sampling effort in the more northerly and higher mountainous areas. The species is considered to have a secure population globally and in Canada. Population monitoring data are sparse, but there have been significant population declines in some migratory stopovers in eastern North America and in some wintering areas (Andres et al. 2012; Tibbitts and Moskoff 2014). The greatest threats to the species are on its migration and wintering grounds: hunting in the Caribbean and South America and, to a lesser extent, high levels of organochlorines and selenium (Tibbitts and Moskoff 2014). Atlas data provide a valuable baseline for future monitoring of breeding numbers and distribution in British Columbia.