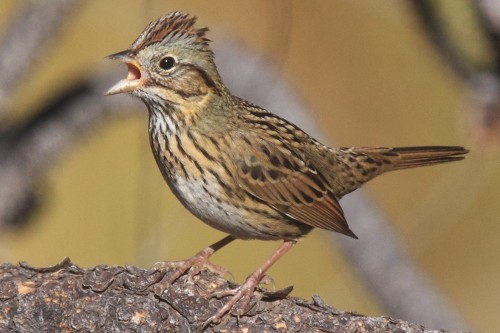 Characteristics and Range This small sparrow, an attractive but typically hard-to-see bird of the undergrowth, is distinguished by fine black streaks on its buffy upper breast and a conspicuous buffy "moustache". Usually described as elusive or secretive, a skulker, its loud, distinctive song announces its presence during the breeding season. Its breeding range extends from Pacific to Atlantic coasts, roughly coincident with the Boreal Forest and, in the west, continues south along the Rocky Mountains and Sierra Nevada. Its winter range includes a narrow coastal strip extending from southwestern British Columbia to Baja, much of the southwestern United States, and Mexico.

Distribution, Abundance, and Habitat The Lincoln's Sparrow breeds throughout most of interior British Columbia, with records concentrated in the northeast (the Peace River and Fort Nelson River lowlands) and the north-central interior (Nechako Plateau). It is sparsely distributed in some coastal areas, but absent as a breeder from most of Vancouver Island and the Georgia Depression Ecoprovince.

Point count data and the Probability of Observation model confirm that this species is most abundant and most easily found in forests of the Boreal and Taiga Plains ecoprovinces. There is a secondary area of abundance in the Central Interior Ecoprovince, and generally high but locally variable abundance and PObs in the Sub-Boreal Interior and Northern Boreal Mountains ecoprovinces. This contrasts somewhat with Campbell et al. (2001) who found the highest summer numbers of Lincoln's Sparrow in northern Haida Gwaii and the Sub-Boreal Interior Ecoprovince. The Lincoln's Sparrow is also widespread in the Southern Interior Mountains and Southern Interior ecoprovinces. Comparison of Atlas results with The Birds of British Columbia suggests that, in general, the overall distribution of this species has remained more or less constant since the late 1990s. Lincoln's Sparrow breeds across a wide elevation range; it is most numerous at the relatively low elevations (250-1,000 m) that include much of the Taiga and Boreal Plains ecoprovinces.