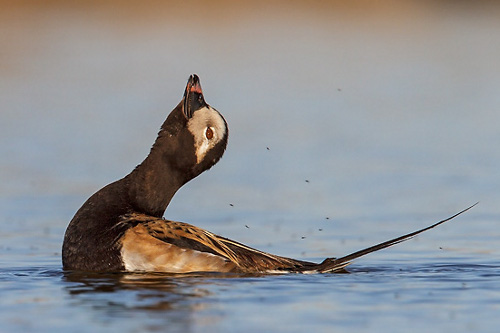 Characteristics and Range This charismatic, northern sea duck has a circumpolar distribution, breeding in tundra and taiga regions of North America, Europe and Asia, and migrating to cold and temperate seas and coasts to overwinter. In North America, the Long-tailed Duck breeds across arctic and sub-arctic parts of the continent, but is familiar to most birdwatchers on its wintering grounds along the north Pacific and north Atlantic coasts, and on the Great Lakes. Long-tailed Ducks can dive to 60 m, deeper than any other duck, and are unique among waterfowl in having three different plumages per year (basic, supplemental, and alternate), which means that their appearance is almost continuously changing between spring and fall (Robertson and Savard 2002).

Distribution, Abundance, and Habitat The Long-tailed Duck is a very scarce breeder in British Columbia. There are just three confirmed breeding records, all in the Northern Boreal Mountains Ecoprovince, two on the Stikine-Yukon Plateau at Blackfly Lake and Log Cabin (Campbell et al. 1990), and one on Mulvaney Lake west of the Spatsizi Plateau in the Cassiar Mountains (MacLeod et al. 2007). Pairs in potential breeding habitats in mid-June at three different Northern Boreal Mountains locations constitute the only possible Atlas breeding evidence. Campbell et al. (1990) present many more records across northern British Columbia with a similar level of possible breeding evidence.

All confirmed breeding in British Columbia is near subalpine lakes, likely in wetland, shrub or krummholz habitats (MacLeod et al. 2007). It seems likely that the species is an occasional breeder in the northern mountains and plateaus of British Columbia, but the remote, inaccessible nature of this range and preferred habitats mean that finding breeding evidence is very challenging.

Conservation and Recommendations Declines in wintering areas in North America are suggested by several authors (e.g., Crewe et al. 2012), and a drastic decline in northern Europe's Baltic Sea has led to the species being listed as globally Vulnerable (BirdLife International 2015). More information on population trends, delineation, dynamics and ecology are required for arctic Canada breeding populations (Sea Duck Joint Venture 2015). In remote northern British Columbia, birders are encouraged to search suitable habitat in mid-late summer for more breeding evidence of this and other species.