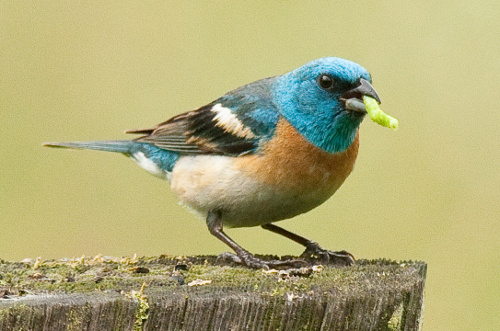 Characteristics and Range Few of our shrubland birds delight observers as much as the spectacular male Lazuli Bunting with its blue, white and cinnamon plumage. Its protracted singing period lasts long after males of other species have finished for the season, maintaining the vibrant sounds of summer. The Lazuli Bunting is a short- to medium- distance migrant that breeds across the Great Basin, the Cascade and Rocky Mountains, the Sierra Nevada and the western Great Plains, and winters mainly on the Pacific Slope in Mexico (Greene et al. 2014). British Columbia marks the northern limit of its breeding range.

Distribution, Abundance, and Habitat Lazuli Buntings are most widespread across the southern third of the province, east of the Coast Mountains. Breeding was also widely confirmed during the Atlas along the lower Fraser Valley and in the upper Lillooet River drainage, with isolated breeding confirmed to 54°N and 125°W, and outlying records of probable and possible breeding north to the Peace River lowlands and Williston Lake, and southwest to Vancouver Island. Distribution during the Atlas period indicates that the gradual northward and westward expansion of the species' provincial range since the 1940s has continued since The Birds of British Columbia was published in 2001.

Centres of the provincial population, indicated by highest predicted Probability of Observation and actual abundance values for the Lazuli Bunting, are in the Southern Interior Ecoprovince, in three separate drainages: the South Okanagan, Fraser River, and upper Thompson River valley systems. Similarly high abundance is found only locally in the Georgia Depression and Central Interior. Within these areas, it is most common in the 250-750 m elevation range, and in Ponderosa Pine, Interior Douglas-fir, and Bunchgrass biogeoclimatic zones.

Conservation and Recommendations Lazuli Buntings are doing well in British Columbia, showing a long-term increasing trend based on Breeding Bird Survey data. Global responsibility for conservation stewardship in the province is low, which, coupled with the species' ability to adapt to cleared areas with shrub growth and other recovering disturbed sites, suggests that specific conservation strategies in British Columbia are not warranted at this time.