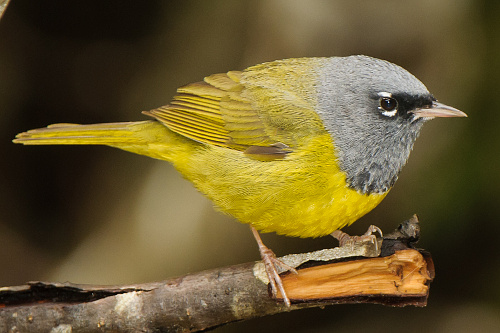 Characteristics and Range This shy skulker is usually difficult to detect, except when singing in breeding areas. The MacGillivray's Warbler is a long-distance migrant that breeds at low to moderate elevations in western mountains from southeastern Alaska to northern Mexico (Pitocchelli 2013). It winters mostly along the Pacific Slope and highlands of Central America. Both recognised subspecies occur in British Columbia; G. t. tolmiei breeds in coastal areas and G. t. monticola breeds in the interior.

Distribution, Abundance, and Habitat The MacGillivray's Warbler is widespread in southwestern and central-southern interior British Columbia, and only absent from Haida Gwaii and most of the far north-east. The Atlas greatly filled in the breeding season distribution since The Birds of British Columbia was published in 2001, particularly in coastal and northern regions; this was likely due to increased effort. The MacGillivray's Warbler is not confirmed as breeding in the Taiga Plains and Boreal Plains ecoprovinces, where the closely related Mourning Warbler occupies similar habitat. There is an extensive, but narrow, hybrid zone just east of the crest of the Rocky Mountains where the two species make contact (Irwin et al. 2009). Breeding is from sea level to about 2,500 m, one of the broadest ranges of any species in the province.

The centres of population highlighted by the most extensive areas of high Probability of Observation and highest abundance on point counts were in the Southern Interior Mountains, Sub-Boreal Interior, and separate patches of the northern and southern Coast and Mountains Ecoprovince and adjacent Georgia Depression. The pattern of abundance by elevation is complex, perhaps reflecting a preference for lower elevations in coastal areas and higher elevations in the interior, but there is a clear preference for three biogeoclimatic zones in which the species is most common: Coastal Western Hemlock, Interior Cedar-Hemlock and Sub-Boreal Spruce.

Conservation and Recommendations Although there is no overall conservation concern for this species, there has been an overall moderate decrease in populations in British Columbia and Canada since about 1970 (Environment Canada 2011, 2014). That decline seems to be steepening in recent years, perhaps as a result of habitat changes related to forest harvest patterns and succession. Current logging practices will continue to open new breeding habitat for this species, although replanting decisions may affect habitat quality (Pitocchelli 2013).