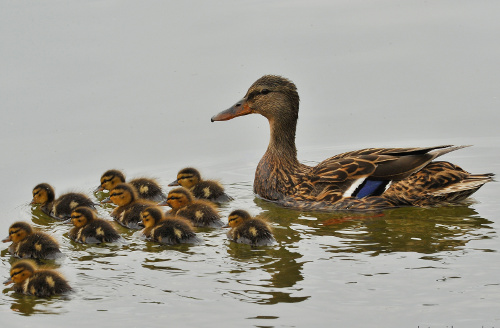 Characteristics and Range The Mallard is the ancestor of nearly all domestic duck breeds, and the most familiar duck to the public worldwide having been introduced to many urban settings. It is also the most common duck across its native global range, which spans much of the northern hemisphere (Drilling et al. 2002). In North America it is a resident and short- to medium-distance migrant, breeding across northern and central parts of the continent and wintering as far south as northern Mexico.

Distribution, Abundance, and Habitat The Mallard is a widespread breeding bird in British Columbia, with distinct clusters of breeding in the Georgia Depression Ecoprovince, the Chilcotin-Cariboo and Thompson-Nicola-Okanagan wetland systems, the Southern Rocky Mountain Trench and the Peace River lowlands. This distribution has not changed appreciably since The Birds of British Columbia was published in 1990. At that time, the centre of abundance was the Chilcotin-Cariboo in the Central Interior Ecoprovince. Atlas Probability of Observation and abundance data suggest that the Georgia Depression and adjacent coastal fjords in the Coast and Mountains ecoprovinces are now of similar importance. The Mallard occurs over a wide elevation range, but is most abundant below 500 m.

The Mallard is at home in all types of freshwater wetlands, from artificial urban ponds to remote natural lakes and slower-flowing watercourses. It nests in a wide variety of habitats from woodlands to Cattail (Typha latifolia) marshes to the fringes of pools in busy city parks, usually situating its nest on the ground, a platform, or near the base of a tree, and concealing the nest with vegetation. The Mallard has an unusually long nesting season, which can extend from February to November on British Columbia's south coast (Campbell et al. 1990).

Conservation and Recommendations There are no major conservation concerns in British Columbia for this adaptable and resilient duck. Its preference for low elevation wetlands may result in increased vulnerability for interior breeders, if wetlands in dry interior regions become smaller in size and fewer in number through projected climate change (Bunnell et al. 2013). It is the single most important game duck in British Columbia; here and elsewhere, hunting is effectively managed (Campbell et al. 1990, Drilling et al. 2002).