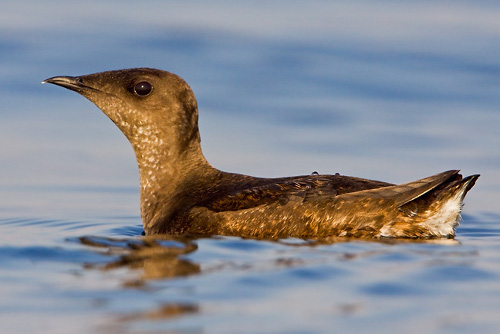 Characteristics and Range The Marbled Murrelet is unusual among alcids and temperate seabirds in nesting in trees, for which its mottled breeding plumage provides camouflage. This was one of the last bird species in North America to have its nest described; nests are typically widely dispersed in coastal forests and high in the canopy of very large conifers (Nelson 1997). Adults visit nests primarily in dark twilight adding to the difficulties of locating nests. Restricted to western North America, the species breeds from the Aleutian Islands to central California; the bulk of the population breeds in Alaska and British Columbia (Nelson 1997, Piatt et al. 2007, COSEWIC 2012). Wintering birds are found throughout the breeding range and south to northern Mexico.

Distribution, Abundance, and Habitat The Marbled Murrelet breeds in coastal areas of the Georgia Depression and Coast and Mountains ecoprovinces, typically within 30 km of the sea, with a few nests up to 80 km inland (Nelson 1997, Burger 2002). The Atlas breeding distribution includes many of the known concentrations of the species based on at-sea and radar surveys (Burger 2002, Piatt et al. 2007, COSEWIC 2012), although some concentrations in remote areas were missed (e.g., northern Haida Gwaii, parts of the central and north coast, and western Vancouver Island).

Eighteen of the 26 confirmed breeding reports involved adults carrying food, and 7 involved fledged young; in both situations the nest sites might have been in different 10-km squares because adults routinely commute tens of kilometres from foraging to nest sites (Hull et al. 2001) and newly-fledged juveniles move similar distances within the first few days of fledging (Lougheed 2001). One "confirmed" breeding record was based on adults leaving or entering a presumed nest site on San Juan Ridge on southwest Vancouver Island. This site warrants closer investigation because such behaviour at a tree is not necessarily confirmation of an active nest; the bird might have been prospecting for a nest site (Nelson 1997).

Atlassing reported most Marbled Murrelets below 250 m elevation with a few up to 750 m, but many nests in British Columbia have been found above 250 m, with some above 1,000 m (Burger 2002, COSEWIC 2012). The Atlas data show the highest abundance in the Coastal Western Hemlock biogeoclimatic zone, which matches the known distribution of nesting (Burger 2002, COSEWIC 2012).

Conservation and Recommendations The British Columbia population is estimated as 72,600-125,600 birds, about one quarter of the global population (COSEWIC 2012). Old-growth forest loss and fragmentation are considered the greatest threats to the species and higher breeding numbers are consistently correlated with accessible areas of suitable forest habitat (Burger and Waterhouse 2009). Other potential threats include oil spills, fisheries bycatch, boat disturbance and changes to marine habitat and prey stocks (COSEWIC 2012).