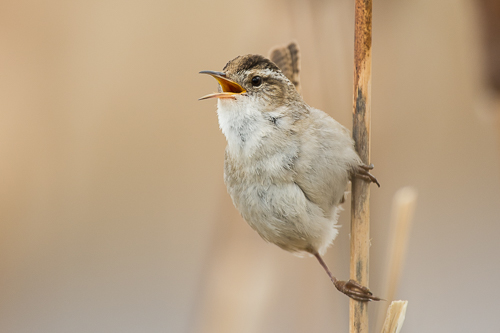 Characteristics and Range This boisterous wren is more often heard than seen, broadcasting its scratchy songs from dense vegetation in marshy habitats. It has a highly competitive nature. This is exemplified by males that will sing for hours at a time to claim a territorial advantage over a rival, and by both sexes' habit of destroying the eggs of both neighbouring Marsh Wrens and other species (including much larger birds like the Yellow-headed Blackbird). Marsh Wrens occur across most of sub-boreal North America; they are partial migrants, the most northerly breeders move south or to the coasts to spend the winter, but coastal and some western interior populations are resident. Two clearly separable evolutionary groups, eastern and western, meet in the central Great Plains, differ in the number of songs that males learn (about 50 in the east, and up to 200 in the West), and may in fact represent different species (Kroodsma and Verner 2014).

Distribution, Abundance, and Habitat The Marsh Wren's distribution is closely tied to lower and mid elevation wetlands of all sizes, the main centres of breeding being in the southwest, southern and central interior, and northeast of the province. This range has not changed since The Birds of British Columbia was published in 1997; slightly more widespread breeding recorded by the Atlas in the northeast is likely the result of wider coverage during the Atlas period.

The areas where Marsh Wrens are most likely to be found are: the Chilcotin and Cariboo plateaus; the Thompson-Nicola valley and plateau system; the lower Fraser Valley, and the central Southern Rocky Mountain Trench. Campbell et al. 1997 considered it most numerous in the Georgia Depression. Atlas point counts and PObs results expand on this, indicating the main population centres are on the mid-elevation, wetland-studded plateaus of the Central Interior Ecoprovince, which supported the highest abundance on Atlas point counts, and in the low-lying marshes and agricultural drainage systems of the Georgia Depression. Whilst this is an accurate current picture, it should be noted that sample sizes were small, and randomised point counts may not adequately cover this wren's restricted wetland habitat.

Conservation and Recommendations There are no conservation concerns for Marsh Wren, which shows a long-term increase across Canada and within British Columbia (Environment Canada 2011). It readily colonises man-made wetlands, which helps to compensate for local losses incurred from wetland drainage for agriculture and development.