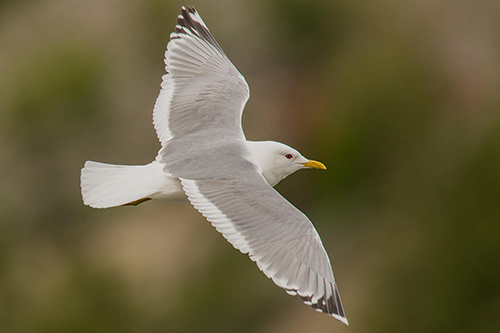 Characteristics and Range The Mew Gull is familiar to British Columbia birders as the smallest and most delicate of the white-headed gulls. It is most commonly encountered outside the breeding season in coastal areas and agricultural lowlands where it forages for a variety of prey, from fish spawn to earth worms. It has an almost circumpolar range, occurring across Europe and Asia. In North America, it is restricted as a breeder to the northwest, and winters along the Pacific Coast south to Baja (Moskoff and Bevier 2002). Like many other gulls, it is usually a colonial breeder, but is the only white-headed gull to regularly nest in trees.

Distribution, Abundance, and Habitat As a breeder, the Mew Gull is confined to western and northern parts of the province, where it is sparsely distributed. The Atlas results confirmed Mew Gulls nesting on Haida Gwaii for the first time. Most Atlas records were of possible breeding (i.e., birds in suitable habitat during the breeding season). Away from Vancouver Island, fewer confirmed breeding sites were found during Atlas surveys than were mapped in Campbell et al. (1990), although it is unlikely that any real decline in breeding locations has taken place. Rather, the remoteness of known and potential breeding sites limited access by volunteers during the five-year Atlas timeframe. Some previously known breeding sites may have been vacated (e.g., in the lower Fraser Valley at Harrison Lake and in the extreme northeast of the Taiga Plains Ecoprovince), but with the exception of the expansion to Haida Gwaii, there has been little range change since The Birds of British Columbia was published in 1990.

The Mew Gull is an uncommon breeding species, and during the Atlas was only found in single pairs or very small colonies of up to 10 birds (4 nests) in the Georgia Depression, Coast and Mountains, and Northern Boreal Mountains ecoprovinces. Probability of Observation values are generally quite low, in part due to the local and isolated nature of small colonies and flocks (the largest reported totaled 28 birds) in the extensive and complex wetland systems of coastal and northern British Columbia Highest Pobs values are in coastal fjords, and in the Alsek and Tatshenshini river watersheds in the Southern Alaska Mountains Ecoprovince in the far northwest.

The Mew Gull nests in both saltwater and freshwater environments. Along the coast it prefers rocky and treed islets in lakes and sheltered inshore waters. In the interior it nests in and around marshes and other wetlands, including muskeg and subalpine ponds. And in the far northwest, nests on open gravel bars along actively eroding and braided river channels.

Conservation and Recommendations The Mew Gull is not considered at risk in any part of its range. More extensive surveys of wetland habitats will help to clarify its status in northern parts of the province and the Coast Mountains.