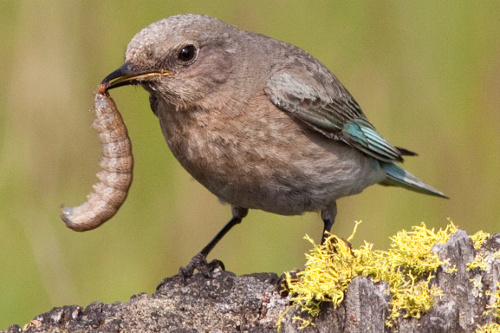 Characteristics and Range Mountain Bluebirds brighten open habitats across most of western North America. Often foraging like American Kestrels, they use their long wings to hover, dive or sally from perches to catch insects on the ground. When winter approaches, most Mountain Bluebirds migrate to warmer habitats at lower elevations at the southern extent of their breeding range and southwards to Mexico's Sierra Madre (Power and Lombardo 2006). Some birds overwinter in milder habitats along British Columbia's coast or southern interior (Campbell et al. 1997).

Distribution, Abundance, and Habitat The Mountain Bluebird breeds chiefly across the central-southern interior of British Columbia. The Atlas maps a more widespread breeding season distribution in the Southern Interior and Central Interior ecoprovinces, but notably fewer occurrences in the Southern Interior Mountains Ecoprovince, compared to when The Birds of British Columbia was published in 1997. While its range extends north through to Alaska, there are only two confirmed Atlas breeding records in the north, one near Atlin and the other over 500 km to the south, southeast of Tatlatui Provincial Park. While The Birds of British Columbia reports several breeding season records along the coast (most from the 1920s and 1930s), there are no Atlas records.

Breeding at elevations from 250 to 2,000 m, Mountain Bluebirds are most common between 750 and 1,250 m. Their preferred habitats include mountain meadows, burned or harvested cut-over areas, and where grasslands and shrub-steppe meet forest, and natural cavities or nest boxes abound (Power and Lombardo 2006). Mountain Bluebirds also use a wide variety of non-excavated holes in broken or downed trees and stumps, even in cracks of boulders (Aitken and Martin 2007, Aitken and Martin 2008). Mountain Bluebirds are most common locally in open habitats of the Interior Douglas-fir, Sub-boreal Pine-Spruce, and Ponderosa Pine biogeoclimatic zones, and in the Bunchgrass biogeoclimatic zone where nest boxes are provided.

Conservation and Recommendations Mountain Bluebirds are declining in British Columbia, most notably in the centre of provincial abundance in the Great Basin Bird Conservation Region, and in a broad range of other open habitats across western Canada (Environment Canada 2014). Availability of nest sites limits populations (Power and Lombardo 2006), and invasive European Starlings will outcompete Mountain Bluebirds for cavities (Aitken and Martin 2008). Erection of nest boxes can help, especially around natural grasslands, as can maintenance of nest sites like snags next to foraging territories such as burns, cut blocks and lightly grazed swards. Like other higher elevation insectivores, Mountain Bluebirds are vulnerable to ecosystem changes related to climate and impacts to their prey base. They are sensitive to pesticides (Power and Lombardo 2006) and successional habitats older than 20 years are usually unsuitable (Holt and Martin 1997).