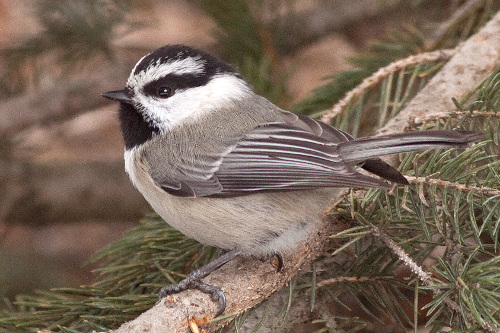 Characteristics and Range The Mountain Chickadee inhabits montane coniferous forests throughout its range, which spans the western cordilleras of North America from the southern Rocky Mountains to the Yukon Plateau. A distinct white stripe in the black cap above the eye and a raspier call differentiate it from the closely related Black-capped Chickadee, with which it occasionally hybridizes. In some areas where the two species overlap, they show differences in habitat selection (Hill and Lein 1988, Grava 2012). Like other members of the Paridae family, this species is essentially non-migratory; some seed-dependent populations periodically disperse in response to local food shortages (Mccallum et al. 1999).

Distribution, Abundance, and Habitat The Mountain Chickadee is widespread in montane and plateau areas of central-southern British Columbia east of the Coast Mountains, but rather more sparsely distributed in northern montane regions, west of the Boreal Taiga Plains. Atlas data show a similar provincial range to The Birds of British Columbia published in 1997, but fill many gaps in the breeding season distribution, and show a wider distribution across the north, especially around the Stikine River basin and Atlin Lake, including the first confirmed breeding records north of the Skeena River. This may reflect an increase in observer effort rather than a genuine distributional change, but the large increase in records, including numerous confirmed breeding locations, suggest that a recent northward expansion may have occurred.

The Probability of Observation model and Atlas point counts show the centre of abundance is on the slopes and plateaus of the Southern Interior Ecoprovince, spilling into adjacent parts of the Central Interior and Southern Interior Mountains ecoprovinces, approximately as described by Campbell et al. (1997). Whilst the species uses a wide range of climate-vegetation types, the majority of records and the highest abundance are in the Interior Douglas-fir and Englemann Spruce - Subalpine Fir biogeoclimatic zones, and between 1,000 and 2,250 m elevation.

Mountain Chickadees prefer drier coniferous and mixed conifer-deciduous forests including riparian strips, and generally like more mature rather than recently logged stands. They are cavity nesters (Martin and Eadie 1999), reliant on dead, decaying or otherwise weakened trees and snags to excavate their own nest holes, or cavities excavated by woodpeckers. They also readily use nest boxes; most "unboxed" populations may be limited by availability of natural nest sites.

Conservation and Recommendations The Mountain Chickadee is not considered at risk and given the broad range of habitats and wide elevation used, it should be able to adapt to climate-induced habitat change. Population fluctuations (an initial pulse followed by a decline) are expected in response to Mountain Pine Beetle (Dendroctonus ponderosae) outbreaks; retention of Trembling Aspen (Populus tremuloides) and snags during salvage logging after bark beetle outbreaks may increase available nest sites (Martin et al. 2006).