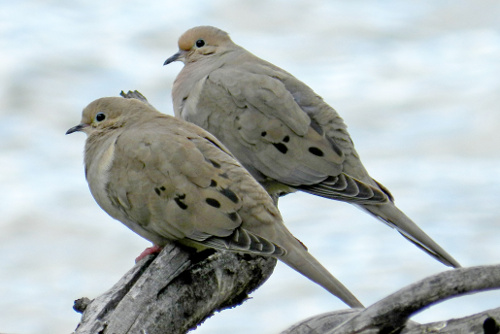 Characteristics and Range One of North America's most common and best-known birds, the Mourning Dove is resident across large parts of its North and Central American range, but populations at more northerly latitudes (including much of British Columbia) migrate south short distances to avoid the cold winters. Its soft, mournful song is a part of the soundscape of summers in backyards across the United States and southern Canada; it is widely recognised by authors and song-writers, and is one of the most heavily hunted of all the world's birds (Otis et al. 2008). Mourning Doves are short-lived (the average adult lifespan is just one year), but can breed several times each year, a strategy which allows the population to sustain managed hunting without detriment.

Distribution, Abundance, and Habitat Several local changes in distribution are apparent in the two decades since The Birds of British Columbia was published in 1990. Atlas surveys recorded no observations in coastal regions or the Coast Mountains north of central Vancouver Island where there are local clusters of historical records. There were no or very few Atlas records from the Cascade Mountains, the north Thompson drainage and the Cariboo Plateau where this dove was previously more widespread, but Atlas surveys found it more widely distributed across the Chilcotin Plateau than depicted in Campbell et al. (1990).

The Mourning Dove is most common in the Southern Interior ecoprovince, where Ponderosa Pine and Interior Douglas-fir biogeoclimatic zones support the highest abundance, between 250 and 750 m elevation. The centre of abundance when The Birds of British Columbia was published was the Okanagan Valley. Atlas Probability of Observation modelling suggests the lower Thompson and middle Fraser valley floors may also be important, and the Atlas extended the known breeding season elevation use in British Columbia from 880 m up to 1,230 m.

Mourning Doves are habitat generalists that use a variety of human-modified and natural habitats, including mature gardens in urban and suburban environments, agricultural landscapes of all types from orchards to rural rangeland, and native open woodlands with grassy understoreys and deciduous riparian groves. Local populations may be sustained year-round by regular supplementary feeding with grains, especially at cattle feedlots and also backyard feeders.

Conservation and Recommendations Mourning Dove populations are generally faring well continentally, but in British Columbia a long-term decline is apparent from Breeding Bird Survey data, which is borne out by comparing Atlas findings with The Birds of British Columbia. The Atlas network did not find Mourning Doves in several areas that have recently been colonised by the invasive Eurasian Collared-Dove. This possible link deserves further investigation, because it has been suggested that Eurasian Collared-Doves exert foraging dominance over Mourning Doves in habitats where they overlap (Poling and Hayslette 2006).