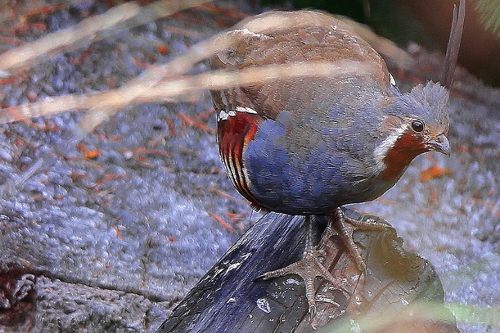 Characteristics and Range The Mountain Quail is a secretive inhabitant of dense shrub and forest habitats in hill and mountain ranges along the Pacific Coast, and in the western Great Basin of North America. The northern limit of its native range is clouded by numerous introductions, but may have been the Columbia River in the Coast and Cascade mountains (Gutiérrez and Delehanty 1999). It was introduced to the lower Fraser River valley and southern Vancouver Island in British Columbia in the late 1800s, but only established a small breeding population on the southern tip of Vancouver Island (Campbell et al. 1990).

Distribution, Abundance, and Habitat The last breeding record for British Columbia was in the early 1970s; there were just four records between that time and the publication of The Birds of British Columbia in 1990. No records during the Atlas and only two eBird records from the 1970s suggest that the species is now extirpated from British Columbia.

Conservation and Recommendations The failure of previously introduced populations to sustain themselves should dissuade any further attempts to introduce the bird to British Columbia.