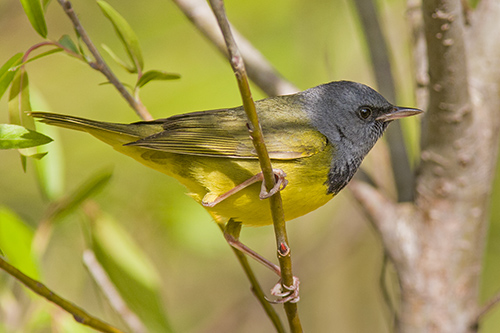 Characteristics and Range Although rarely encountered by most British Columbians, the Mourning Warbler is quite similar to the more familiar MacGillivray's Warbler in appearance, voice and habits. It is one of the last migrants to return to British Columbia in the spring, with first arrivals typically showing up during the last week of May. The Mourning Warbler breeds in northern temperate and southern boreal forests from the Atlantic Coast westward to the Rocky Mountain foothills. It winters in Central America and northern South America (Pitocchelli 2011).

Distribution, Abundance, and Habitat The Mourning Warbler has expanded its breeding range into British Columbia in recent decades, with the first isolated records from the Taiga Plains in the late 1960's and early 1970's (Weber 1976). By the mid-1970's, the species was relatively common in the Fort Nelson lowlands (Erskine and Davidson 1976). Range expansion has continued since then. The Mourning Warbler is now widespread across lowland areas of the Taiga Plains and Boreal Plains Ecoprovinces. The breeding range within the province is similar to that described when The Birds of British Columbia was published in 2001, but the Atlas has revealed a recent expansion into the Rocky Mountain foothills south of the Peace River.

The species is locally common in the lowlands of the Peace and Fort Nelson rivers, with the highest Probability of Observation values modelled in the latter. Although recorded from a relatively wide range of elevations, the Mourning Warbler is more than twice as common below 500 m as it is above that altitude.

The Mourning Warbler breeds primarily in deciduous and mixedwood shrubby habitats: forest edges, stand openings, riparian areas and regenerating burns and cutblocks are commonly occupied habitats in British Columbia. It is probably one of few bird species that has benefitted from industrial development in the Boreal Forest (Pitocchelli 2011). Breeding habitat in the province is similar to elsewhere in its range, although in British Columbia the species seems to prefer edges and openings of mature forest over the large expanses of younger forest that are occupied farther east.

Conservation and Recommendations Although Breeding Bird Survey trends show a widespread moderate long-term decline, the Mourning Warbler has expanded its range in northeastern British Columbia, overlapping the breeding range of the very closely-related MacGillivray's Warbler. Hybridisation between the two species occurs in a corridor that parallels the Rocky Mountain foothills in the south Peace River area and is thought to be the only location where this regularly occurs (Irwin et al. 2009). Atlas data indicate that another contact zone may exist in the Liard River valley and adjacent Rocky Mountain foothills.