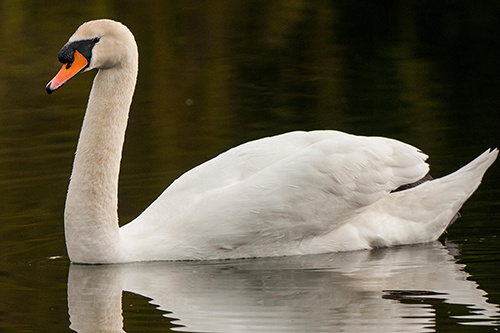 Characteristics and Range This majestic, non-native, white swan with its long, S-curved neck and orange-and-black, knobbed bill is well known in British Columbia. In its native range it breeds across northern and central Eurasia and winters from northern Africa to Korea (Johnsgard 2010). It is introduced and locally established in North America, South Africa, New Zealand, Australia, and Japan. From the mid-1800s through the early 1900s, Mute Swans were imported to many areas of North America as an adornment to city parks and large estates, and for zoos and aviculture collections (Ciaranca et al. 1997). Many individuals escaped or were released and have established resident populations along the Atlantic Coast of the United States, in the Great Lakes region and in the Pacific Northwest.

Distribution, Abundance, and Habitat The Mute Swan was introduced to Victoria in 1889 and the 1930s and became established by the early 1950s with subsequent dispersal to southern Vancouver Island, the Gulf Islands, and the Fraser Valley (Campbell et al. 1990). Its current distribution is centered in the southern Georgia Depression Ecoprovince, similar to that reported in The Birds of British Columbia.

The Mute Swan is uncommon in the Georgia Depression Ecoprovince; the Atlas records showed only nine records of confirmed breeding. Mute Swan numbers around the Strait of Georgia have been relatively stable since 1999 (Crewe et al. 2012).

The Mute Swan nests in coastal ponds and estuaries, and inland ponds and creeks, in rural and urban areas.

Conservation and Recommendations Since being introduced into North America, the Mute Swan has increased greatly in numbers, to the extent that it is considered to be an invasive species in most parts of its North American range, including British Columbia It is capable of causing significant conflict with human activities and harm to native ecosystems, such as overgrazing aquatic vegetation and displacing native waterfowl (Ciaranca et al. 1997). Hybrids with the Trumpeter Swan have occurred on Vancouver Island. Because of conflicts with native species and ecosystems, as well as the human economy the range expansion of the Mute Swan should be discouraged. Close watch should be kept on its displacement of native waterfowl species and its effects on wetland habitats.