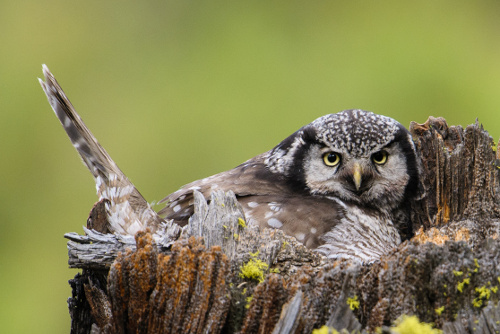 Characteristics and Range The Northern Hawk Owl breeds in the circumpolar boreal forests and southern taiga from Alaska to the Atlantic Coast and from Siberia to Scandinavia. It is distinctive among owls for its diurnal behaviour, and morphology resembling an Accipiter hawk with a long tapered tail and relatively pointed wings. It is generally a non-migratory species except during severe winters and periods of decreased prey availability when it may irregularly wander (irrupt) farther south, much to the delight of local birdwatchers. In the mountains of British Columbia and the west it may also be an altitudinal migrant.

Distribution, Abundance, and Habitat The Northern Hawk Owl ranges throughout the interior of British Columbia, including the western flanks of the Coast and Cascade Mountains. It nests locally in mountains and on plateaus chiefly in central and northern British Columbia, but is not common anywhere. The Atlas shows a similar range to the The Birds of British Columbia published in 1990, but did not record any observations from the western half of the Northern Boreal Mountains. There is no reason to believe they are no longer there, but rather this low density bird simply wasn't recorded in this remote, rather inaccessible region with a paucity of observers. Their fledged young are noisy and adults like to perch atop prominent snags, so they are not inconspicuous when breeding. They are also very nomadic, nesting in areas with high prey density for a year or more before moving on, so do not necessarily occupy their full breeding range each year.

There were not enough data to develop abundance calculations or a Probability of Observation model. The species clearly remains an uncommon resident of the northern interior, and a local and rare resident at higher elevations in the southern interior (Campbell et al. 1990). It nests in broken tops of trees and woodpecker holes in moderately open coniferous and mixed forests, of spruce (Picea) species, Subalpine Fir (Abies lasiocarpa), and Mountain Hemlock (Tsuga mertensiana) (Campbell et al. 1990), and marshes near logging or forest fire openings (Duncan and Duncan 2014). Few nests are found and most confirmed breeding records are of fledged young. There was one rather anomalous Southern Interior nest record from the hot, dry valley of the Fraser River north of Lytton in the Ponderosa Pine biogeoclimatic zone, where it was most unexpected (Routley 2012).

Conservation and Recommendations It is a solitary, diurnal species and so not well surveyed by either the Breeding Bird Survey or the Nocturnal Owl Survey. It is generally considered not at risk in Canada, and much of its breeding range is outside of commercial timber harvest areas (Duncan and Duncan 2014). It is quite tolerant of human presence; open patches created in forests by industry may improve hunting, but may also reduce nesting habitat.