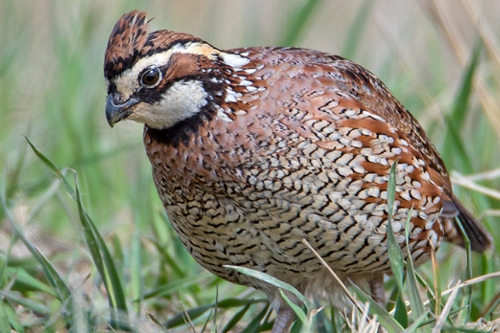 Characteristics and Range Most British Columbians birders would be startled to spot this social quail, as it is essentially non-migratory, with a native range spanning southeast North America, well east of the Continental Divide. This handsome bird has a brown and tan back, a chestnut body speckled with white, a small crest, and a white throat, forehead, and superciliary stripe. It is one of the most economically valuable gamebirds in North America and has been introduced to many countries worldwide, usually unsuccessfully (Brennan et al. 2014). In North America, local introductions to Washington and Idaho afford the rare possibility that the bird may be observed in the extreme south of British Columbia.

Distribution, Abundance, and Habitat The Northern Bobwhite was only recorded in one 10-km square during the Atlas period, in the Creston Valley in the West Kootenay in 2008, 2011, and 2012. A covey of two males and ten females were reported in 2011, and two males and seven females in 2012. No young have been recorded in the last few decades anywhere in British Columbia. It is uncertain if these are from local releases or southern immigration.

Attempts at introducing the Northern Bobwhite for hunting or aesthetics occurred across southern British Columbia between the early 1900s and the 1970s (Campbell et al. 1990); none was successful over the long-term. It is known to have bred in three locations in southern British Columbia into the 1980s, including the Creston Valley (Campbell et al. 1990), suspected immigrations from Idaho.

Perhaps the closest potential source population to the Creston Valley is in northern Idaho, where the Northern Bobwhite was introduced in the 1880s to agricultural areas of the Boise Valley, and is now suspected to be a rare breeder, known to overwinter in the pan-handle of northern Idaho (Idahobirds 2013). Within their range, Northern Bobwhite can be found year-round in early successional habitats, agricultural fields, grassland, open woodland areas, roadsides, and wood edges (Brennan et al. 2014).

Conservation and Recommendations As an introduced species in British Columbia the Northern Bobwhite is listed as "exotic" and is not of management concern. Native populations are at risk of becoming extirpated in Canada (Cadman et al. 2007), and it is listed as endangered by COSEWIC in Canada due to steep declines in southern Ontario, probably due to grassland habitat loss and agricultural field management, yet it is still hunted by the millions in the United States. Populations at the northern edge of its range, and perhaps previous introductions to British Columbia, are routinely decimated by harsh winters.