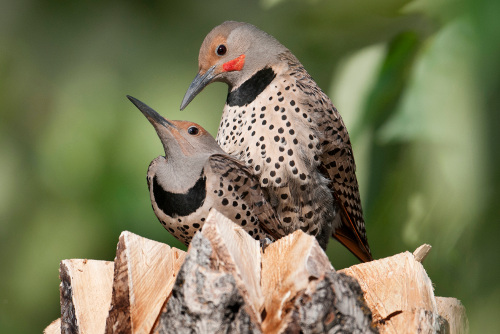 Characteristics and Range The colourful and charismatic Northern Flicker inhabits open forests and parklands throughout North America wherever its primary prey, ants, can be found. Unlike other woodpeckers, the flicker spends most of its time foraging on the ground (Wiebe and Moore 2008). Differences in plumage colour can easily distinguish between the two subspecies groups found in British Columbia, the auratus group, or Yellow-shafted Flicker (C. a. auratus and perhaps C. a. luteus) and the cafer group or Red-shafted Flicker (C. a. cafer). They form a long contact zone, thousands of years old, following the Rocky Mountains north to about Tumbler Ridge and then angles northwest to the Haines Triangle (Wiebe and Moore 2008). North and east of this contact zone, the Yellow-shafted form prevails, while south and west of it the Red-shafted form is most common. Intergrades are regularly seen throughout southern British Columbia, becoming more common closer to the contact zone. Northern Flickers are short-distance migrants, with northern breeders migrating farther south to winter at lower elevations (Gow and Wiebe 2014), resulting in large numbers wintering in the valleys of southern British Columbia (Campbell et al. 1990).

Distribution, Abundance, and Habitat Widespread throughout much of British Columbia, Northern Flickers occur in every ecoprovince and almost every biogeoclimatic zone. The breeding range is relatively unchanged since The Birds of British Columbia was published in 1990. Northern Flickers are more sparsely distributed in the Northern Boreal Mountains and Coast and Mountains ecoprovinces.

Striking in its habitat flexibility, Northern Flickers are found at all elevations, but are most common below 1,250 m. It is most likely observed and most abundant in the open mixedwood and coniferous forests in the valleys and on the lower plateaus of the Southern Interior and Central Interior ecoprovinces, especially in the Interior Douglas-fir, Ponderosa Pine and Bunchgrass biogeoclimatic zones.