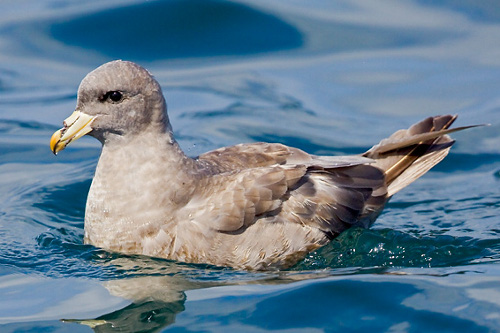 Characteristics and Range Among the longest lived of all species of birds, with some individuals exceeding 50 years of age, the Northern Fulmar has a wide circumpolar breeding distribution (Hatch and Nettleship 1998). It is abundant in Alaska, but exceedingly rare as a breeding species in British Columbia The Northern Fulmar is a medium-sized species of "tube-nose" bird that exhibits two distinct colour morphs: one white with grey mantle, the other uniformly dark grey. Of the two, the grey morph is more commonly observed off the British Columbia coast. Highly oceanic, the species is a generalist, surface-feeding seabird that often trails fishing boats in order to feed on offal.

Distribution, Abundance, and Habitat The Northern Fulmar is known to have bred at only one site in British Columbia: Triangle Island in the Scott Islands archipelago, where a few pairs appear to breed in most or perhaps all years (Campbell et al. 1990). In contrast, the species is abundant and widespread in offshore waters along the British Columbia coast in spring and fall. During the Atlas project, the species appeared to breed successfully in at least two years, 2008 and 2009, in a location out of direct sight from accessible observation points.

The Northern Fulmar is extremely rare as a breeding species in British Columbia, where there is little suitable breeding habitat (precipitous sea cliffs with vegetated portions) in close proximity to productive offshore waters. Throughout its range in the Pacific Ocean, breeding colonies are located on remote islands that are unlikely to have human visitors (Hatch and Nettleship 1998).

Just a few pairs of Northern Fulmars, less than five, breed on the steep cliffs of Puffin Rock, a small islet that connects to Triangle Island at low tide (Campbell et al. 1990).

Conservation and Recommendations The only known breeding colony in the province is well protected, and is so small that it is of no conservation importance. The incidence and amount of plastic particles found in stomachs of Northern Fulmars across the eastern North Pacific were among the highest reported anywhere in the world. Plastic ingestion has increased dramatically over a 40 year period, warranting close monitoring (Avery-Gomm et al. 2012).