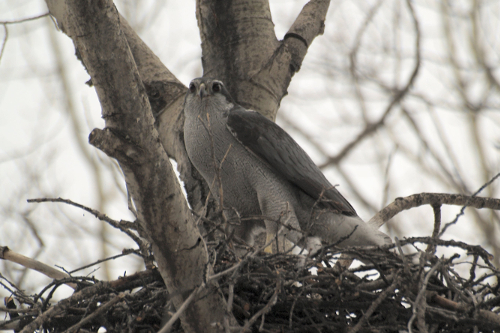 Characteristics and Range Often only glimpsed as it flies across a road or river, the Northern Goshawk is a widespread, but irregularly seen forest raptor, and the largest of the 3 Accipiter species in the province. It is a fairly secretive breeder, although it can be extremely aggressive when young chicks are in the nest (Squires and Reynolds 1997). It has a Holarctic distribution, occurring throughout northern Eurasia, and in North America it breeds throughout the Boreal Forest and forested regions of the western mountains west south to Mexico. Most birds are resident, but some move south or to lower elevations during winter. There are two subspecies in British Columbia: A. g. laingi breeds in the coastal rainforests west of the Coast Mountains, while A. g. atricapillus breeds throughout the interior.

Distribution, Abundance, and Habitat The Northern Goshawk is widespread and breeds throughout most forested regions of British Columbia. Confirmed breeding on Haida Gwaii and in many coastal areas is due to recent surveys by the forest industry and the province, filling a large distribution gap since 1990 when The Birds of British Columbia was published. It occurs at low densities and easily goes undetected, which contributes to the lack of nesting records in some of the more remote areas of the province where it surely breeds.

Atlas Probability of Observation data show very little variation in the likelihood of finding this species across the province; the few areas with slightly higher PObs values coincide with areas of targeted survey effort for the species.

The Northern Goshawk prefers to breed in mature and old forests, particularly coniferous stands, but will also readily use Trembling Aspen (Populus tremuloides) groves, willow (Salix) thickets and mixed-wood forests (Squires and Reynolds 1997). Nesting habitat selection may be based on forest stand structure and intactness rather than on stand age or tree species composition. In coastal areas, drier coniferous forests tend to be preferred (Campbell et al. 1990; COSEWIC 2013).

Conservation and Recommendations The coastal subspecies is designated as Threatened (COSEWIC 2013), while the interior subspecies is not considered to be at risk. In British Columbia, the Northern Goshawk, particularly the coastal subspecies, has been much studied in recent years in its preferred nesting habitat of mature and old forests as these forest types are under pressure from commercial forestry activities. Adaptive management strategies aimed at modifying logging practices to reduce their impacts on nesting habitat have been adopted in some areas; the success of these strategies is yet to be determined (NGRT 2008). The continued monitoring of known nesting territories of the coastal subspecies is an important step for tracking population health and determining potential forestry impacts. Populations on Haida Gwaii are considered the most imperiled and represent the most genetically distinct sub-group of the coastal subspecies and should receive the highest management and conservation efforts (NGRT 2008; COSEWIC 2013). Short rotation times between harvests will continue to challenge this species, especially in coastal ecosystems (COSEWIC 2013).