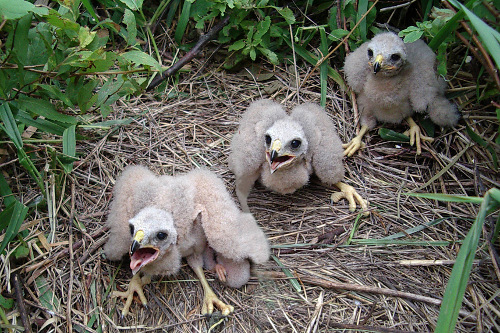 Characteristics and Range The Northern Harrier's range spans most of North America and Eurasia; some authors consider the Eurasian population to be a separate species (Smith et al. 2011). In North America, it breeds mainly in the Boreal Forest. It is known to many birders by its large white rump patch and dihedral flight pattern as it forages low over open fields in search of small mammals and birds. It is quite distinct amongst diurnal raptors in having an owl-shaped facial disc and sexually dimorphic adult plumages, the male being largely greyish, and the female largely brownish. It is the only hawk in British Columbia that regularly nests on the ground.

The Atlas Probability of Observation models map the most extensive, higher Pobs values in the Central Interior, Boreal Plains and Taiga Plains ecoprovinces. The large areas of grassland and range habitat in these ecoprovinces are a likely reason why they support the bulk of the breeding population in British Columbia.

The Northern Harrier nests on the ground mostly in open, marshy areas, but occasionally in drier fields and open burns; most nests in British Columbia have been found in wet or dry Cattail (Typha latifolia) marshes (Campbell et al. 1990). The Atlas found the Northern Harrier at elevations ranging from sea level on the south coast to 1,760 m in the Central Interior Ecoprovince. Sample sizes from point counts were low but suggest that there is little difference in abundance across this broad altitudinal range.

Conservation and Recommendations Whilst the Northern Harrier is not a species of conservation concern in British Columbia, ground nests close to centres of human population or on agricultural lands are susceptible to disturbance, destruction and predation from humans, their activities and their domestic pets. Where feasible, consideration should be given to erecting fencing exclosures or signage around known nests to protect them from accidental destruction and disturbance.