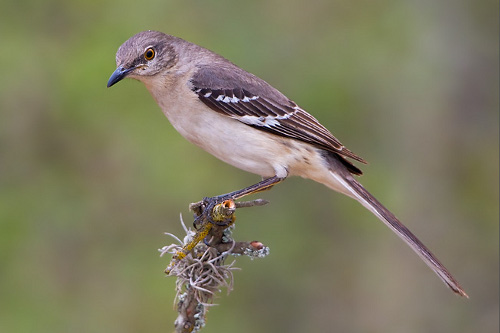 Characteristics and Range The Northern Mockingbird has a dizzying array of as many as 150 different song types, laden with mimicry, yet is rarely heard in British Columbia, which lies north of its main breeding range. This range spans the southern half of North America from the Maritimes on the Atlantic Coast, through the Great Lakes and southern Prairies to northern California, and south to Central America and the Caribbean (Farnsworth et al. 2011). The mockingbird is mostly resident throughout its range, except in northern reaches. There are three subspecies; M. p. polyglottos occurs in British Columbia (Farnsworth et al. 2011).

Distribution, Abundance, and Habitat First reported in British Columbia in 1931, the Northern Mockingbird is a fairly regular but scarce visitor in very small numbers. Campbell et al. (1997) report the most records from the Georgia Depression for both winter and summer. It has bred in the Georgia Depression and the Southern Interior ecoprovinces (Campbell et al. 1997), but was not confirmed as breeding during the Atlas. The only records of singing males reported to the Atlas came from the lower Fraser Valley, the Okanagan and the East Kootenay.

The Northern Mockingbird favours open habitats such as parks, cultivated lands and orchards, second growth shrubs and trees, and suburban gardens, and is quite adaptable to human-dominated landscapes. It has expanded its range northward during the past century and this trend is likely to continue as suburbs and disturbed, open habitat increases (Farnsworth et al. 2011).

Conservation and Recommendations There are no conservation concerns in British Columbia regarding the Northern Mockingbird. Breeding Bird Surveys show declines across the United States (Farnsworth et al. 2011). Due to their propensity to live in human-modified landscapes, urban birds have been found to have high concentrations of contaminants compared to rural individuals (Farnsworth et al. 2011).