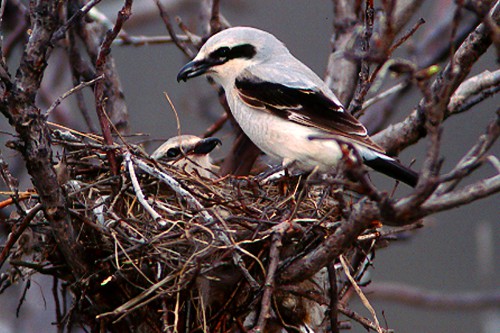 Characteristics and Range The circumpolar Northern Shrike has a North American breeding range that spans the northern boreal and taiga from coast to coast, but it is much more often observed on its wintering range across southern Canada and the northern United States. It is an exciting winter visitor in open, low-elevation habitats in central and southern British Columbia. Birdwatchers hope to catch a sight of this tame songbird, whose Latin binomial means "butcher watchman", because it is a furtive hunter that impales its prey on convenient spines (its larder) for later consumption. Despite its predatory nature, it is a songbird, and family groups emit bizarre sounds while caring for noisy fledglings. Its melodious and erratic song can locally fill the remote mountains of northern British Columbia where few birders are lucky enough to venture.

Distribution, Abundance, and Habitat The Northern Shrike seems to reach the southern extent of its breeding range in the Northern Boreal Mountains Ecoprovince, which was the case when the The Birds of British Columbia was published in 1997. Atlas records east of the Rocky Mountains and in the upper Skeena drainage were of birds observed in potential breeding habitat: muskeg and high elevation scrub respectively. It was difficult to determine if these were late migrants or if they represent the outer limits of the breeding range. Campbell et al. (1997) noted that records have come from the Peace River lowlands in all seasons, so perhaps the Northern Shrike breeds in the muskeg habitats east of the Rocky Mountains as it does further north. It probably breeds, in low abundance, in a wider range of the Northern Boreal Mountains than illustrated by the Atlas, but due to the remote and inaccessible location of its alpine/subalpine habitat in northern British Columbia, it is rarely encountered.

Its highest abundance in British Columbia is likely in the Haines Triangle in the far northwest where there is a cluster of 10-km square records. The cluster of records here represents a previously known breeding area where alpine habitat is easily accessible and much sought after by birdwatchers. Not enough data were available to model a Probability of Observation. The easternmost and lowest elevation (450 m) records came from the Taiga Plains. The western records came from mountainous habitats as high as 1,670 m west of the northern Rocky Mountains, substantially higher than noted in Campbell et al. (1997).

The bulk of the records in northern British Columbia are situated around the Spruce-Willow-Birch and Boreal Altai Fescue Alpine biogeoclimatic zones around treeline krummholz and open meadows.

Conservation and Recommendations The Northern Shrike was not well sampled by the Atlas, nor is it well sampled by the Breeding Bird Survey because most routes lie south of the species' known breeding range in northern Canada and Alaska. Christmas Bird Counts are presently the best way to understand populations and assess status; those data indicate a possible long-term decline in winter numbers in eastern North America and no change in the central and western winter range (Cade and Atkinson 2002).