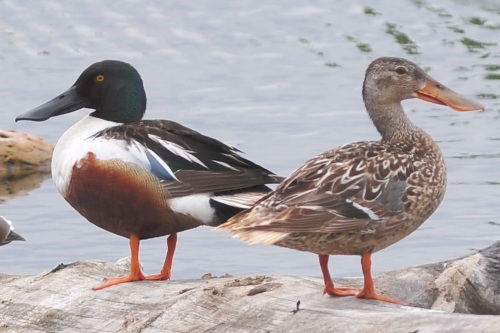 Characteristics and Range This medium-sized dabbling duck is easily recognized with its elongate, spatulate bill, ideally suited for straining small swimming crustaceans from the water. The Northern Shoveler breeds across much of the Northern Hemisphere. In the Nearctic, it breeds throughout much of western North America and locally to the Maritimes, and winters over large areas of North and Central America and the Caribbean (Dubowy 1996). In the Palearctic, it breeds across northern Eurasia and winters from its breeding range south to Africa and south-east Asia.

Distribution, Abundance, and Habitat The Northern Shoveler breeds at scattered sites in the southern Georgia Depression Ecoprovince, the central-southern interior and the Peace River lowlands. The Atlas surveys recorded a breeding distribution similar to that in The Birds of British Columbia published in 1990, but Bunnell et al. (2013) report significant range shifts northward in the British Columbia interior from the 1960s to the 1990s.

The highest mean Probabilities of Observation were found in the Boreal Plains Ecoprovince, followed by the Central Interior and Southern Interior ecoprovinces. The densest cluster of breeding records, however, was found along the middle Fraser River and adjacent Fraser Plateau in the Central Interior Ecoprovince, and in the Thompson Valley in the Southern Interior Ecoprovince. Too few data were collected on point counts to draw any conclusions on abundance; randomized point counts generally don't sample the wetland habitats of the Northern Shoveler very well.

The Northern Shoveler prefers margins of open, shallow and muddy wetlands with abundant submergent vegetation and nearby grasslands or rangelands for nesting.

Conservation and Recommendations There are no overall conservation concerns for this species. Continued monitoring will help clarify the degree to which it is expanding its range in the province.