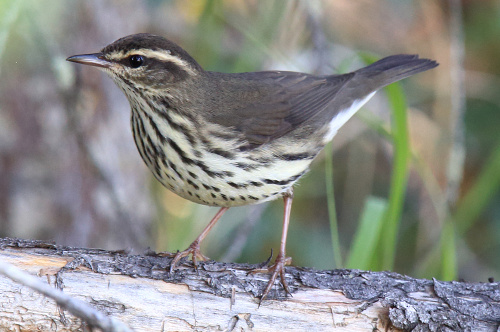 Characteristics and Range This large wood warbler is not a thrush at all, but is aptly-named for its northern breeding range and its thrush-like characters: dull plumage; rich, explosive song that leads dawn choruses; and the habit of spending much of its time on or close to the ground, usually near water. It breeds across North America's boreal and northern hardwood forests, and montane and adjacent plateau forests of the northern Rocky and Appalachian mountains. It is a long-distance migrant, spending the winter in the Caribbean, Central and northern South America (Whitaker and Eaton 2014).

Distribution, Abundance, and Habitat The Northern Waterthrush is a widespread breeder across interior British Columbia east of the Coast Mountains, and straddles that range where lower passes and river valleys provide a contiguous habitat link, including the Skeena, Nass and Bella Coola rivers and the headwaters of Bute Inlet. Whilst the Atlas filled many gaps in the known breeding season distribution, the provincial range of the Northern Waterthrush remains the same as depicted when The Birds of British Columbia was published in 2001.

The Atlas shows that the main centre of Northern Waterthrush abundance in British Columbia is still in the Sub-Boreal Interior Ecoprovince, as noted by Campbell et al. (2001). Highest abundance and the most extensive high Probabilities of Observation were recorded across the Interior and Nechako plateaus and southern Omineca and Skeena mountains, in the Sub-Boreal Spruce biogeoclimatic zone. The Coast and Mountains, and Northern Boreal Mountains support locally high abundance, in the Stikine and Liard drainages, in the Spruce-Willow-Birch biogeoclimatic zone. Lower elevations are preferred, with highest abundance between 500 and 1,000 m. It is much less common in the Taiga Plains, where high PObs values are mapped, and the Boreal Plains, where a dense cluster of breeding records is mapped.

Presence of water and dense understorey vegetation are the most important breeding habitat determinants for the Northern Waterthrush (Whitaker and Eaton 2014). In British Columbia, it breeds in wooded swamps and flooded forests, especially spruce-dominated (Picea) and mixed deciduous forests of Trembling Aspen (Populus tremuloides), alder (Alnus) and birch (Betula) species, and in riparian areas with deciduous shrubs in the understorey, especially willow (Salix) species.

Conservation and Recommendations There appear to be no major conservation concerns on the breeding grounds, with an increasing trend both in British Columbia and across Canada indicated by Breeding Bird Survey data. The species' dependence on water makes it locally vulnerable to drainage of wetlands, and potentially more widely vulnerable in the longer-term to drying and warming climate trends. Spraying to control insect infestations like spruce budworm could reduce Northern Waterthrush prey biomass. On the wintering grounds, loss of mangrove habitat that supports highest wintering densities is perhaps the greatest current conservation concern (Whitaker and Eaton 2014).