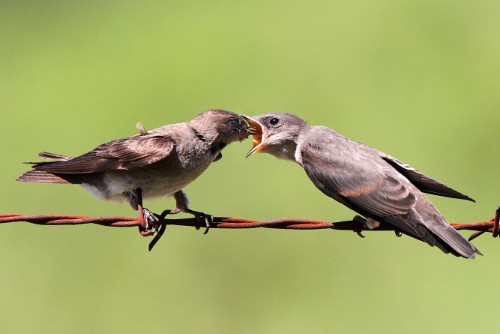 Characteristics and Range Northern Rough-winged Swallows are secondary cavity nesters that routinely rear young in excavated burrows in sand banks. Bank Swallows excavate most of these burrows (Campbell et al. 1997) but the Rough-winged Swallow, as it is commonly known, will use other cavities opportunistically. The hooks and projections on the leading edge of the primary feather are unique amongst the swallows, but the adaptive significance of this feature is unknown. The breeding range extends north from Central America throughout continental North America to the edge of the Boreal Forest. The winter range extends from southern North America through Central America to some Caribbean Islands (De Jong 1996).

Distribution, Abundance, and Habitat This swallow is widespread south of about 56°N except on Haida Gwaii, but sparse and widely-scattered north of that latitude. The Atlas distribution is generally similar to when The Birds of British Columbia was published in 1997: there are no Atlas records for extreme northwestern or far northern British Columbia, but more records in the Taiga Plains suggesting a local expansion there. Very few colonies were reported during the Atlas; the largest (20 nests) was in the upper Stikine River drainage.

The probability of observing a Northern Rough-winged Swallow was highest in the valley floors of the East and West Kootenays, including the southern Rocky Mountain Trench, and the lower Thompson and Fraser rivers, with a more extensive area of moderate Pobs values across the interior plateaus. Point count data confirmed these centres of abundance: birds are most abundant in the Southern Interior Mountains and also fairly common in the Central Interior Ecoprovince. Abundance between 250 and 500 m (corresponding to elevations of valley floors of favoured river systems) was double that in any other elevation band. This expands on Campbell et al. (1997), who considered it most numerous in the Central Interior.

Northern Rough-winged Swallows forage over open water such as ponds and sloughs as well as fields, road cuts, cliff faces and other areas where aerial insects are abundant. Nesting habitats include sandy faces along river banks and natural exposures as well as rocky faces with crevices, road cuts and a wide variety of anthropogenic structures that provide crevices and holes for nest sites.

Conservation and Recommendations Breeding Bird Survey data indicate a long-term decreasing trend in Canada and British Columbia as is the case for many other aerial insectivores (Environment Canada 2011). Causes for the decline remain uncertain with theories including a reduction of insect prey, toxic chemicals, climate change and landscape changes. Conservation in part may relate to protection of nesting sites and populations of primary excavators such as Bank Swallows. River bank protection schemes using riprap should attempt to protect known colonies.