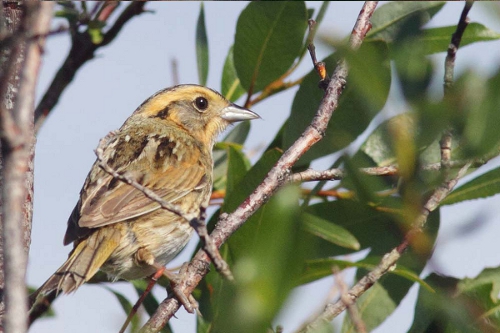 Characteristics and Range Unusual among North American sparrows, the Nelson's Sparrow is not territorial and does not form pair bonds (Shriver et al. 2011). This secretive but rather colourful sparrow has undergone two name changes in recent decades. Prior to 1995 it was known as the Sharp-tailed Sparrow, then Nelson's Sharp-tailed Sparrow until 2009, when it became Nelson's Sparrow (Monroe et al. 1995, Chesser et al. 2009). Three subspecies breed in three disjunct areas across North America: along the Atlantic coast and St. Lawrence River valley; along the shores of James and southern Hudson's Bays; and across the northern Great Plains and southern Boreal Forest in the continental interior, reaching the northwestern limit of its range in British Columbia. The species winters in coastal marshes of the southeastern United States.

Distribution, Abundance, and Habitat The British Columbian breeding range of the Nelson's Sparrow is restricted to lowland areas of the Boreal Plains and Taiga Plains ecoprovinces. This represents a significant range expansion since The Birds of British Columbia was published in 2001, when there were no records from the Taiga Plains. It is probable that these new records are the result of increased survey effort, rather than a recent colonization of the area. The Nelson's Sparrow may still be under-recorded, because its breeding habitat is notoriously difficult to access, and it sings more in the evening than by day.

The modelled Probability of Observation, based on very few data, is highest in the eastern Taiga Plains, where provincial, automated recording surveys targeted the very specific, patchily-distributed wetland habitat favoured by Nelson's Sparrow. The model may therefore be extrapolating inflated PObs values in this region. The dedicated Taiga Plains surveys did, however, detect Nelson's Sparrow in every patch of suitable habitat sampled, suggesting that it could be locally numerous.

In British Columbia, the species is found almost exclusively in damp sedge (Carex) meadows, typically avoiding cattails (Typha latifolia), bulrushes (Scirpus species), similar marsh vegetation, and shrubby wetlands. Its habitat requirements appear to be more specific than those of the Le Conte's Sparrow, with which it is sometimes found. The apparent reliance on sedge-dominated meadows may be unique to northern populations. Small sedge meadows are highly susceptible to changing water levels and are only occupied when conditions are suitable; in larger meadows, birds can more easily adapt to changing conditions. Several sites where Nelson's Sparrows had been found in the past were seemingly unoccupied during the Atlas period.

Conservation and Recommendations The Nelson's Sparrow is Red-listed in British Columbia and a Species at Risk under the British Columbia Forest and Range Protection Act (British Columbia Ministry of Environment 2006). This latter designation allows Wildlife Habitat Areas to be created to protect the species' habitat. However, none has yet been established for Nelson's Sparrow. Many Atlas records came from automated recording devices set up in potential breeding habitat. Future efforts should use this technique in previously unsurveyed areas to define the actual distribution and population within the province, and ground truth the predictions of the PObs model.

Acknowledgements Melanie Wilson kindly provided data, local knowledge and interpretation from the Taiga Plains, which are incorporated into this account.