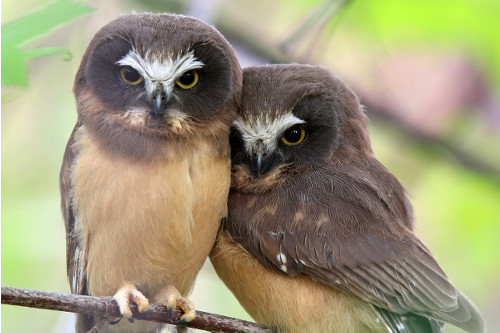 Characteristics and Range Although it is likely the commonest raptor in much of southern Canada and the northern United States, the Northern Saw-whet Owl is rarely seen unless specifically sought after. This small, "earless" owl roosts through the day in dense vegetation and comes out to hunt only when night has truly fallen. On the spring breeding grounds, however, territorial males are easily detected through their whistled songs, the monotonous notes repeated about twice a second for long periods. The species breeds across the temperate and southern boreal forests of Canada and southern Alaska south in the Appalachians to North Carolina and in the mountains of western North America to southern Mexico. It is a partial, short-distance migrant, with many birds leaving northern breeding grounds in the Boreal Forest to winter in southern Canada and south irregularly throughout much of the United States. There are two subspecies recognized, A. a. brooksi on Haida Gwaii (buffy below with higher-pitched song notes) and A. a. acadicus (whitish ground colour below) throughout the rest of the range (Rasmussen et al. 2008).

Distribution, Abundance, and Habitat The Northern Saw-whet Owl is found in all forested habitats in British Columbia south of 57°N; farther north there are a few localized records from the Northern Boreal Mountains Ecoprovince around Atlin Lake, but there are no records from the Taiga Plains Ecoprovince. The distribution of Atlas records is very similar to that reported in The Birds of British Columbia in 1990. The number of Atlas observations is too small to provide meaningful information on the abundance of this owl by region or in biogeoclimatic zones. The population of the Haida Gwaii subspecies is estimated to be 1,900 birds (COSEWIC 2006).

The Northern Saw-whet Owl breeds in all woodland and forest habitats in British Columbia but prefers older forests with openings for foraging, patches of dense vegetation for roosting, large trees for song perches and abundant cavities for nesting (Cannings 1987, Gill and Cannings 1997). It is commonest at low to moderate elevations (up to 1,300 m); in higher and more northern forests dominated by Engelmann or White spruces (Picea engelmannii and Picea glauca) it is largely replaced by the closely related Boreal Owl. It nests in tree cavities, usually those excavated by Northern Flickers or Pileated Woodpeckers, but will readily use suitable nest boxes as well. It captures a wide variety of small mammals and birds, but over most of its range feeds primarily on deer mice (Peromyscus species). On Haida Gwaii, it often forages for invertebrates in the intertidal zone, especially in winter (Rasmussen et al. 2008).

Conservation and Recommendations The distinctive subspecies of the Northern Saw-whet Owl on Haida Gwaii is listed as Threatened in the federal Species at Risk Act because of its restricted range and reliance on old-growth forests (COSEWIC 2006). Clear-cut logging practices with short rotations are almost surely negatively affecting populations of this owl across its range (Rasmussen et al. 2008); long-term monitoring programs such as the Nocturnal Owl Survey and further atlassing efforts are needed to properly assess this impact.