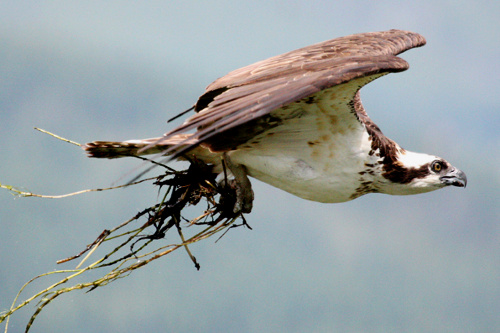 Characteristics and Range The Osprey is one of the most widespread and most-studied raptors on Earth, found on every continent except Antarctica. In North America it breeds across the Boreal Forest, Great Lakes and western cordillera regions from western Alaska to the Atlantic Coast, and patchily farther south especially along the coasts. Most birds migrate to the Gulf Coast, the Pacific Coast of Mexico, or to Central and South America to overwinter, but some coastal birds are resident. It is the only North American raptor that feeds almost exclusively on live fish. It is a very adaptable bird, which readily uses fresh and saltwater environments, has variable migration strategies, and unlike many raptors, it is very tolerant of human activity near its nests (Poole et al. 2002).

Distribution, Abundance, and Habitat The Osprey breeds widely across much of British Columbia, but is absent from Haida Gwaii and the far northeast. The main clusters of distribution are along the larger river systems of the interior and southwest coast, especially the lower Fraser, Okanagan, Thompson, Nicola and Columbia river systems, and both the Southern and Northern Rocky Mountain Trench, especially around Williston Lake. The distribution has expanded somewhat across the north since The Birds of British Columbia was published in 1990, most noticeably in the Northern Rocky Mountain Trench around Williston Lake.

The Probability of Observation model and Atlas point counts suggest that it is most numerous around Williston Lake in the Sub-Boreal Interior Ecoprovince, along the Thompson River system in the Southern Interior Ecoprovince, and along the Kootenay and Columbia river systems in the Southern Interior Mountains Ecoprovince. Campbell et al. (1990) noted that the latter rivers supported the centre of provincial abundance, which at the time was considered one of the highest breeding densities in the world. Ospreys nest over a relatively wide elevation range, but are most common between 250 and 500 m.

Ospreys traditionally use natural nest sites, usually in treetops, cliffs and on rocky ledges. In recent decades many have shifted to using a wide variety of artificial nest sites, in particular communications towers and utility line poles, and purpose-built Osprey platforms. Nests are usually in relatively close proximity to open, often shallow, water that supports a plentiful supply of fish; sites up to 4 km, exceptionally 10-20 km from water may be used where it is energetically feasible (Campbell et al. 1990, Poole et al. 2002).

Conservation and Recommendations The Osprey is a conservation success story. Like many raptors, it declined steeply during the mid-1900s due to the effects of organochlorine pesticides, but rebounded quickly, with populations across North America increasing markedly since the 1970s as a result of the reduction of toxic contaminants and the proliferation of artificial nest structures (Environment Canada 2011). Monitoring Osprey populations is a useful indicator of the persistence of toxic contaminants and the relative health of aquatic ecosystems throughout the species range (Elliott et al. 2000, 2007).