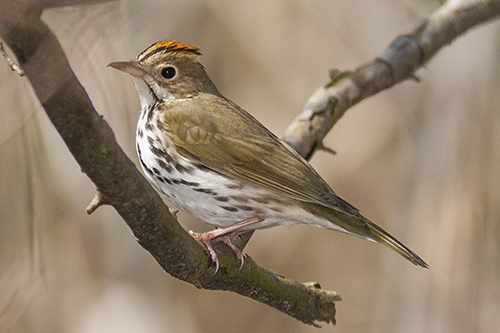 Characteristics and Range The loud, emphatic "teacher, teacher, teacher" song ringing out from mixed forests of northeastern British Columbia is easily recognised as the song of the Ovenbird. This ground-nesting warbler also forages on the ground, making a good visual observation a challenge for field observers. The Ovenbird is a widespread breeder from northeastern British Columbia across the Boreal Forest and Prairies to the Appalachian Mountains and the Atlantic Coast in the east. Wintering is primarily in the Florida peninsula, the Caribbean and from northern Mexico into Central America (Porneluzi et al. 2011).

Distribution, Abundance, and Habitat Breeding season distribution and confirmed breeding records were both concentrated in the Taiga and Boreal Plains ecoprovinces and along the Northern Rocky Mountain Trench. It is more widely distributed in the northeast than when The Birds of British Columbia was published, confirming Campbell et al. (2001)'s suppositions that the bird is more widespread than the only two breeding records known at the time suggested. The Atlas surveys also noted more southerly records, along the Fraser River in the Sub-boreal Interior and along the Southern Rocky Mountain Trench and North Thompson River in the Southern Interior Mountains. This is likely the result of increased coverage, but could reflect a slight expansion of the Ovenbird's range to the southwest.

The probability of observing an Ovenbird was highest along the Peace and Liard River valleys and their tributary drainages, including the Williston Reservoir area. Point counts confirmed that the Ovenbird is most common between 250-500 m, it reaches slightly higher abundance in the Taiga Plains than the Boreal Plains, and is almost entirely concentrated in the Boreal White and Black Spruce biogeoclimatic zone.

Preferred habitats are mixed forests of spruce (Picea) species and Trembling Aspen (Populus tremuloides), or Balsam Poplar (P. balsamifera), or pure aspen stands. The understory is often thick and multi-layered with shrubs and herbaceous components, but birds have been found in stands with limited shrub layers. Abundance of leaf litter appears to be a consistent component of the most-favoured habitats which are drier than those occupied by the closely-related Northern Waterthrush.

Conservation and Recommendations Ovenbirds are not of conservation concern in British Columbia and Breeding Bird Survey data show generally stable trends across the Canadian range (Environment Canada 2011). Habitat fragmentation can adversely affect Ovenbirds (Porneluzi et al. 2011), so the maintenance of large patches of suitable habitat in excess of 100 and possibly several hundred hectares is recommended.