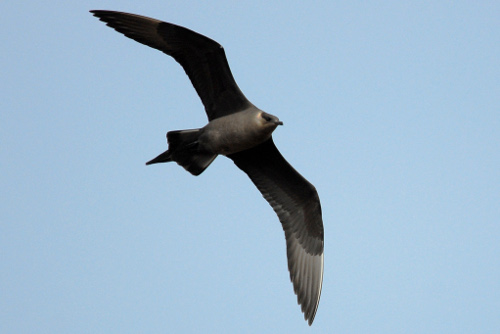 Characteristics and Range Most British Columbian birders know this species as a migrant, and a spectacular, high speed pursuer of terns and gulls. An agile flier, with falcon-like wings and long central tail feathers, it makes most of its living by kleptoparasitism, the act of stealing food from other birds. The victims drop their prey or regurgitate stomach contents in favour of reduced weight and increased speed and agility. The Parasitic Jaeger is a circumpolar breeder and most birds spend the boreal winter at sea in the tropics and southern hemisphere (Wiley and Lee 1999).

Distribution, Abundance, and Habitat In British Columbia, the Parasitic Jaeger breeds exclusively in the extreme northwest of the Northern Boreal Mountains Ecoprovince and the adjacent Southern Alaska Mountains Ecoprovince. It has been suspected to breed in British Columbia on the Tatshenshini and Alsek Rivers since the 1980s, but rugged terrain and inaccessibility delayed the confirmation until the Atlas period (Fraser in prep.). The Alsek and Taku Rivers are known to have unusual bird faunas, more closely aligned with those of the Arctic than the surrounding area (Johnson et al. 2008). The breeding population of Parasitic Jaeger along the Alsek River of British Columbia and Alaska appears to be isolated from the main breeding grounds at higher latitudes. Dark morph birds outnumber light morph birds in the British Columbia breeding area.

The area known to be used by Parasitic Jaegers during the breeding season is relatively small, and the entire breeding population in British Columbia is likely fewer than 50 pairs. The species may be semi-colonial in British Columbia; one location was suspected of having 7 nesting birds on it, and another had 2 pairs exhibiting behaviour suggestive of breeding.

The species nests on gravel bars in the broad, glacial, outwash plain of the Alsek River close to the Alaska border. It appears to be heavily reliant on kleptoparasitising breeding Arctic Terns and Mew Gulls also nesting on gravel bars in this area. Jaegers in this area have also been seen harassing other species for food, including Common Raven, Bald Eagle and Black-billed Magpie.

Conservation and Recommendations The breeding populations of Parasitic Jaeger, Mew Gull and Arctic Tern in this area are dependent on the success of salmon runs in the Alsek River. In years with poor salmon recruitment, breeding gulls and terns fail to raise chicks and leave the area. In addition, years with heavy flooding during the nesting season can erode gravel bars so that nests are destroyed or chicks drown before fledging. In very heavy flood years, the Alsek River can completely fill the valley bottom, eliminating breeding habitat entirely. Climate change is rapidly melting the St. Elias Icefields and likely contributing to increased flood events.

Salmon management efforts that involve joint management between Canada, the United States and local First Nations need to continue and be effective.

This portion of the province is poorly inventoried and there are at least four species which breed nearby in Alaska or the Yukon that could be nesting in suitable habitat in British Columbia's Haines Triangle: Surfbird, Aleutian Tern, Kittlitz's Murrelet, and Northern Wheatear.